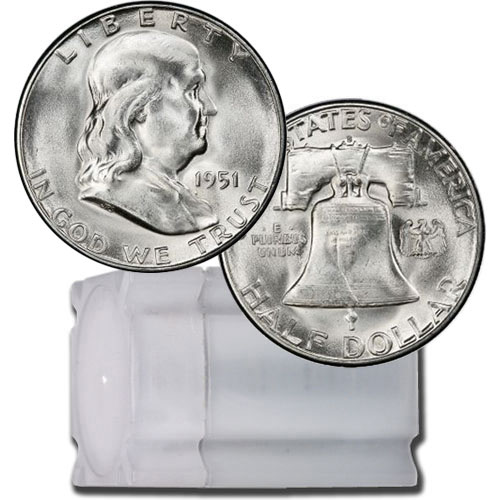 The first thought of many new investors in the precious metals marketplace often strays toward silver bullion options like the Silver American Eagle or Silver Canadian Maple Leaf. Prior to 1964, all US circulation coins were struck with 90% silver content, making remaining specimens an excellent investment option for those looking to get started in precious metal investing. Right now, 90% Silver Franklin Half Dollars are available to purchase online at Silver.com.

Each of the 90% Silver Franklin Half Dollar coins in this listing are in BU condition. Coins in BU condition exhibit no signs of wear and tear, though you may notice a range of minor flaws including breaks in the luster, spotted surfaces, and contact marks from the coining process at the mint.

The path to appearance on coinage for Benjamin Franklin was a complicated one. Under an 1890 statute, coin designs could not be changed without Congressional approval unless the design had been in service for 25 years including the first issue year.

Starting in 1933, US Mint Director Nellie Tayloe Ross wanted to see the man she admired on the nation’s coinage. However, the quarter had just been redesigned in 1932 to feature George Washington. The Walking Liberty Half Dollar and Mercury Dime could be changed without Congressional approval in 1940, but World War II interfered.

Benjamin Franklin was not only a noted author and inventor, he was also one of the first and most influential American diplomats for the United States. Sent overseas to convince the French of the value of the American Revolution, Franklin was key in securing French investment in the American cause for independence.

On the obverse of the 90% Silver Franklin Half Dollar coin is the image of Benjamin Franklin in right-profile relief. It was created by Chief Engraver of the United States Mint, John R. Sinnock. It included the words “Liberty” above and “In God We Trust” below, with a year of issue to the right of Franklin.

If you have any questions, please contact Silver.com at 888-989-7223. You can also reach out to us online using our live chat and email features.