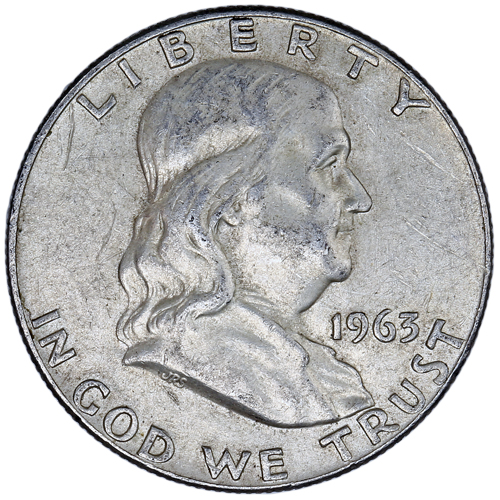 Benjamin Franklin was not only a noted author and inventor, he was also one of the first and most influential American diplomats for the United States. Sent overseas to convince the French of the value of the American Revolution, Franklin was key in securing French investment in the American cause for independence. The 90% Silver Franklin Half Dollar is available today on Silver.com.

90% Silver Franklin Half Dollar coins represent one of the shortest lived designs on the obverse and reverse of US Half Dollars. Only the first-ever Flowing Hair design (1794-1795) and the Draped Bust (1796-1807) designs were in circulation for a shorter period than the Franklin design.

US Mint Director Nellie Ross pushed for Franklin’s inclusion on the Half Dollar in 1946 as the Walking Liberty Half Dollar design came to the end of its circulation life. The Franklin coin was introduced in 1946, and was the last US Half Dollar coin design to see its entire design run include 90% pure silver content.

The Coinage Act of 1965 shifted silver coining in the US away from a 90/10 silver/copper content, to a copper “sandwich” that featured a pure copper center and outer layers made of a cupronickel that contained a copper-nickel alloy.

On the obverse of the 90% Silver Franklin Half Dollar coin is the image of Benjamin Franklin in right-profile relief. It was created by Chief Engraver of the United States Mint, John R. Sinnock. It included the words “Liberty” above and “In God We Trust” below, with a year of issue to the right of Franklin.

90% Silver Franklin Half Dollar Coins were struck by the Philadelphia Mint, Denver Mint, and San Francisco Mints until 1963, when his image was replaced by the portrait of the recently assassinated President John F. Kennedy.

We encourage Silver.com customers to reach out to us with questions. Our customer service team is available at 888-989-7223, online through our live chat, and via our email address.