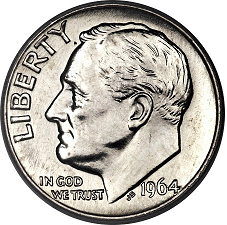 The US dime is the smallest denomination in the United States that was previously available with 90% silver content. From its first introduction in the 1790s to the 1964 date mark, these coins featured 90% silver content with a balance of 10% copper for durability in circulation. The current design of President Franklin D. Roosevelt has been on the coins since before the transition away from 90% silver and is still a viable option for those looking to build their physical holdings of silver. Now, 90% Silver Roosevelt Dimes are available to you for purchase online at Silver.com.

The US dime went through three design changes in the 20th century, with the Roosevelt Dime marking the last change in the imagery used on the coins. The Barber Coinage crossed the century line from 19th to 20th as it was introduced on the coins in 1892 and used until 1916. That design was then replaced with the ever-popular Mercury Dime.

Mercury Dimes were actually known as the Winged Liberty design after the Winged Phrygian cap that Liberty wore in Adolph A. Weinman’s design, but it was nonetheless replaced with the portrait of President Roosevelt following his death in 1945. The Roosevelt Dime has been on the dime ever since that time.

The obverse face of the 90% Silver Roosevelt Dimes includes the left-profile bust of President Franklin D. Roosevelt. Designed by John R. Sinnock, the image depicts the president with “Liberty” to the left side of the design field and “In God We Trust” right under the chin of the president in the portrait.

On the reverse side of 90% Silver Roosevelt Dimes is a depiction of a large torch with an olive branch to one side and an oak branch to the other. Inscriptions on this face of the coin include the nation of issue, the denomination, and the phrase “E Pluribus Unum.”

These 90% Silver Roosevelt Dimes are available to you with a total face value of $1 (USD) worth of dimes. That means you will receive a bag of 10 dimes. We cannot guarantee the specific date marks you will receive in your bag, other than to say that all the coins will come with a date mark between 1946 and 1964.

Silver.com customer service is available to field your questions on the phone at 888-989-7223. Our team members are also available on the web using our live chat service and email address features.