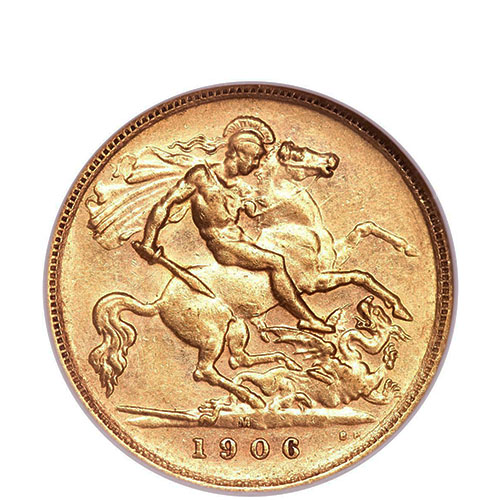 First introduced in 1489, the Great Britain Gold Sovereign isn’t the oldest gold coin issued by British mints, but it is the most historically significant in terms of longevity and symbolism. The Gold Sovereign was first released by King Henry VII in 1489 as a symbol of the power and strength of the monarch. In later years it would be a symbol of unification following the Wars of the Roses. Right now, Gold Great Britain ½ Sovereign Coins are available to purchase online at Silver.com.

Most of these Gold Great Britain ½ Sovereign Coins were originally struck between 1817 and 1937, or from 1980 onward. The ½ Sovereign coins from the Royal Mint feature a different reigning monarch on the obverse whose portrait is used on the sovereign throughout their individual reign.

Many of these Gold Great Britain ½ Sovereign Coins are likely to feature the right-profile portrait of Queen Victoria I. Prior to her great-great-granddaughter Elizabeth II’s current reign as Queen of England, Victoria I had the longest reign of any British monarch at 63 years, seven months, and two days. Her effigy appears on ½ Sovereign Coins issued from 1837 to 1901.

Other possible obverse portraits include those of Victoria’s son and short-term successor King Edward VII, her grandson King George V, her great-grandson King George VI, and the aforementioned Queen Elizabeth II. All coins issued from 1980 onward feature one of four different possible portraits of Queen Elizabeth II from the Royal Mint used since that time.

The reverse side of Gold Great Britain ½ Sovereign Coins includes Benedetto Pistrucci’s 1817 depiction of St. George riding on horseback as he slays a powerful dragon. This symbol of power and strength is associated with the sovereign coinage, but during portions of Queen Victoria I’s rule there was a crowned shield on the reverse instead.

If you have any questions about these coins, please contact Silver.com. Our customer service team is available at 888-989-7223, online using our live chat, and via our email address.