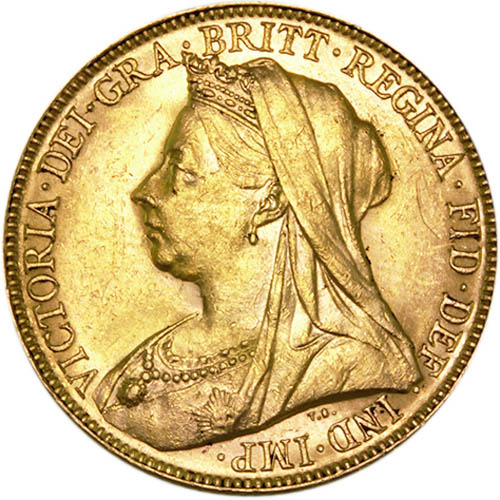 If you are looking at gold for sale from the Royal Mint, the Great Britain Gold Sovereign is a popular choice. While all of the modern gold sovereigns from 1952 onward feature Queen Elizabeth II’s effigy, there are still plenty of historic gold sovereigns from the reign of her great-great-grandmother Queen Victoria I. The Great Britain Gold Sovereign of the Victorian Era is available to you for online purchase today at Silver.com.

Prior to 2015, the longest-reigning monarch in British history was Queen Victoria I. The woman who came to the throne in 1837 would go on to lead the empire as it expanded its borders globally and broke the record for the longest reign by a British monarch, surpassing the many kings and queens who had come before her.

Though her great-great-granddaughter Elizabeth II would surpass Victoria I’s reign in 2015, Victoria I’s gold sovereign coins remain relatively common collectibles because of her long reign and the many years in which the coins were struck. Great Britain Gold Sovereigns from the Victorian Era date between 1837 and 1901.

On the obverse of coins from 1837 to 1887 is the Young Head design of Queen Victoria I. Her Majesty is captured in left-profile relief as a young woman and is featured without a crown on her head.

The reverse of gold sovereigns from this same era feature either the Shield Back design, a crowned royal shield, or the St. George design used from the 1817 reintroduction of the gold sovereign. From 1837 to 1887, the Shield Back design was used. However, there was a concurrent striking of the Victorian Sovereign with St. George between 1872 and 1887. From 1888 onward, all coins had only the design of St. George.

On the obverse of Great Britain Gold Sovereigns from 1887 to 1893 is the Jubilee Head design. This crowned vision of Queen Victoria I captures her in the middle of her life and was inspired by a bust of the monarch created to celebrate her Golden Jubilee in June 1887. The obverse of coins from 1893 to 1901 have an aged Queen Victoria I on the coin’s obverse.

We encourage Silver.com customers to contact us with questions at 888-989-7223. You can also reach out to us online through our live chat and email address, or visit our website to find the price of gold per ounce.