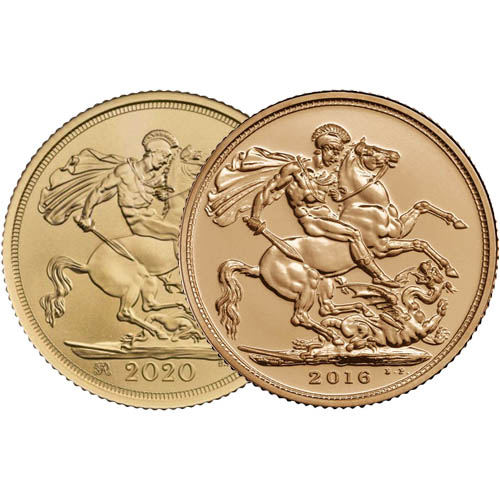 Please note that at the moment, Silver.com only has Gold Sovereigns with a 2016 date mark available to fulfill orders in this listing.

First issued in 1817, the Gold Great Britain Sovereign is the only gold circulation coin from the 19th and early 20th centuries that is still in production today as a gold bullion coin. Though it has a history as both a circulating form of currency and as a gold bullion piece, the design concept of the coin has remained the same for more than 200 years. Today, Gold Great Britain Sovereigns of mixed types are available to you online at Silver.com.

Following Britain’s victory over Napoleon at the Battle of Waterloo in 1815, the kingdom decided to review the coinage in circulation within its realm. A new gold piece was devised that reflected the concept of the original English sovereign introduced in 1489 by King Henry VII, but later canceled by King James I. The return of the Gold Sovereign in Great Britain came in 1817. Since that time, the core focus of the design has been to feature the reigning monarch on the obverse and St. George on horseback slaying a dragon on the reverse.

All of these Gold Great Britain Sovereigns are available to you in Brilliant Uncirculated condition with a protective plastic flips. The coins in this listing are mixed types with random date marks possible. The specific coin you receive cannot be guaranteed in advance. All items are chosen at random after your payment has cleared.

Silver.com does not guarantee the design or design in advance, nor can we guarantee variety if you purchase more than one. Buying multiples coins can result in receiving coins that come from the same type and have the same date.

The obverse of Gold Sovereign Coins features a portrait of a British monarch. Queen Victoria and Queen Elizabeth II featured on the coins the highest number of times when date marks are taken into consideration. However, coins from the reign of Queen Elizabeth II are far more common given she is the current monarch and has reigned since 1952, the longest reign of any British monarch in history.

On the reverse of the Gold Great Britain Sovereigns, you will most likely find the image of St. George slaying a dragon. This design was created by Benedetto Pistrucci in 1817 and featured on most sovereigns until 1825. It was briefly replaced by the Royal Arms, but during the reign of Queen Victoria, it returned as the primary design element. It has only been replaced in the decades since for special issues or anniversary date marks.

Please contact Silver.com with any questions about gold for sale. You can call us at 888-989-7223, chat with us live online, or email us directly.