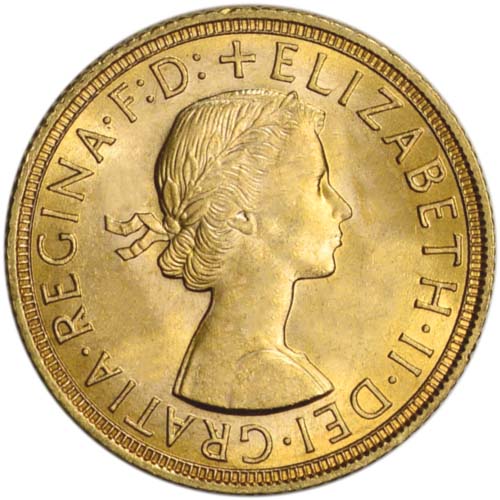 The first English coins known as sovereigns were authorized by King Henry VII in 1489 and issued with .549 ounces of gold content and a 42 mm diameter, which was twice the weight and size of the modern gold sovereigns. In this era, these gold coins were far too expensive to be used in circulation and were likely handed out to visiting dignitaries.

As of 1817, the Royal Mint has produced the Great Britain Gold Sovereign in every year with the effigy of the ruling monarch on the obverse and Benedetto Pistrucci’s 1817 depiction of St. George on the reverse. The Great Britain Sovereign gold coins for sale here today come from the reign of Queen Elizabeth II.

In terms of availability, Gold Sovereigns of Elizabeth II are the most common in the market today because of her long reign. Her Majesty has surpassed the 63-year rule of her great-great-grandmother Queen Victoria I for the longest reign in history for a British monarch. Gold Sovereigns with her effigy have been available since 1953.

This listing makes Great Britain Gold Sovereigns available from throughout Elizabeth II’s rule. The older portraits of Her Majesty are harder to come by, but not impossible. The Queen’s first-generation portrait was designed in 1953 by Mary Gillick and in the design captured the youth and optimism of the new Queen as she wore a wreath crown atop her head in the effigy.

Coins available from 1968 to 1984 feature the second-generation Arnold Machin design, one which is very similar to Gillick’s in capturing the youth of Elizabeth II but also incorporates a crown in the design this time. From 1985 to 1997, Raphael Maklouf’s regal portrait of Queen Elizabeth II served as the third-generation design. Coins from 1998 to 2015 bore the fourth-generation design by Ian Rank-Broadley, and those issued as of 2016 have Jody Clark’s fifth-generation depiction of the Queen.

The reverse of all Great Britain Gold Sovereign includes St. George on horseback. This design has been on the modern Gold Sovereign coin since 1817, with only a few issues during the 19th century when St. George was replaced on the design field.

Please feel free to contact Silver.com. Our customer service team is available at 888-989-7223, online using our live chat, and via our email address.