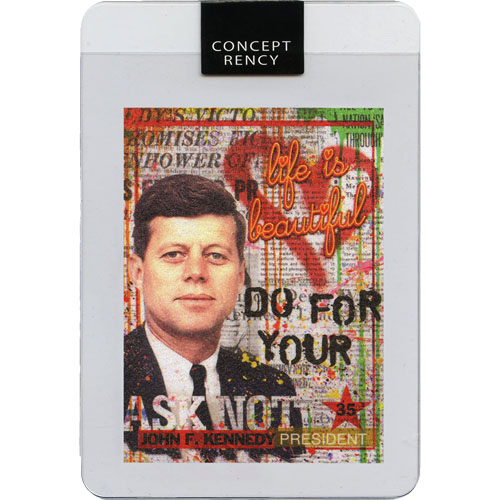 The election of President John F. Kennedy as the 35th President of the United States of America marked a turning point in American history. After World War II, the Korean War, and the post-war boom in the 1950s, Americans were looking to a more peaceful world on the horizon. His election to office and his goals for the nation marked what many called the start of Camelot in America. Now, John F. Kennedy Presidential Collector Cards are available to you for purchase online at Silver.com.

Rency is an underground artist who specializes in street art reflective of pop culture. An American artist, little is known about Rency as an individual. In fact, no one knows the true identity of Rency.

The obverse of the John F. Kennedy Presidential Collector Card features a full-color portrait of President Kennedy. The 35th President of the United States of America, Kennedy’s election excited a large portion of the American population as they saw the young president as a sign of a new generation taking over the reins of government. He was known for his major speeches, including speaking in Berlin at the height of the Cold War and challenging the American public to back NASA in the nation’s efforts in the Space Race with the Soviet Union. This side of the card is diamond-encrusted for visual brilliance.

On the reverse of the Kennedy Presidential Collector Card, you will find brief info on the series concept and on the artist, Rency. This side of the card features the unique serial number out of 300 cards and bears the signature of Rency.

Silver.com customer service is available to assist you with inquiries at 888-989-7223. You can also chat with us live online or email us directly.