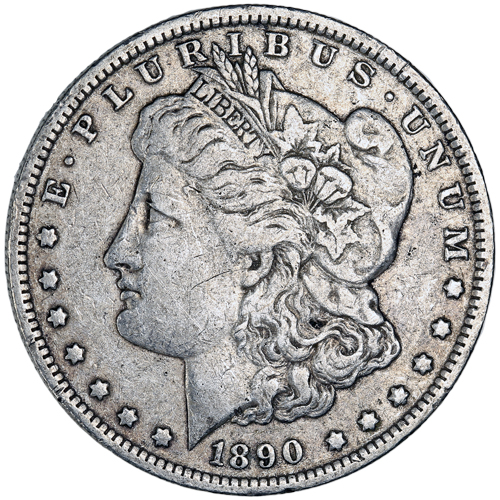 Designed by George T. Morgan in 1878, the United States Silver Dollar coin introduced in that same year would go down in the history books as one of the most beloved coins in US history, even if it was met with a lukewarm reception at first. Today, the Morgan Silver Dollar Coin is available to purchase online from Silver.com.

US silver dollar production was halted in 1873 with passage of the Coinage Act of 1873. This brought an end to the use of the Seated Liberty dollar design from Philadelphia Mint engraver Christian Gobrecht, and also brought to an end the free coining of silver in the United States.

The Morgan Silver Dollar coins in this listing are from 1878 to 1904, the original production run of the Morgan Dollar design. Each coin listed here is in XF condition, which indicates there is very light wear on the highest points of the design. Often you’ll find some mint luster left on the coin and most of the devices on the coin are still clearly defined.

On the obverse of the Morgan Silver Dollar is a left-profile of Liberty wearing a wreath upon her head with a headband featuring the word “Liberty” engraved upon it. Her effigy is surrounded by 13 stars and the phrase “E Pluribus Unum.”

The reverse of all Morgan Dollars includes a version of the heraldic eagle of the United States. Though no heraldic shield is featured, the bald eagle is front-facing with its wings outstretched. It is depicted holding arrows in one talon and an olive branch in the other, with its head looking to the viewer’s left, where it clutches the olive branch of peace.

Please don’t hesitate to reach out to Silver.com with questions. You can reach our customer service team on the phone at 888-989-7223, online using our live web chat, and via our email address.