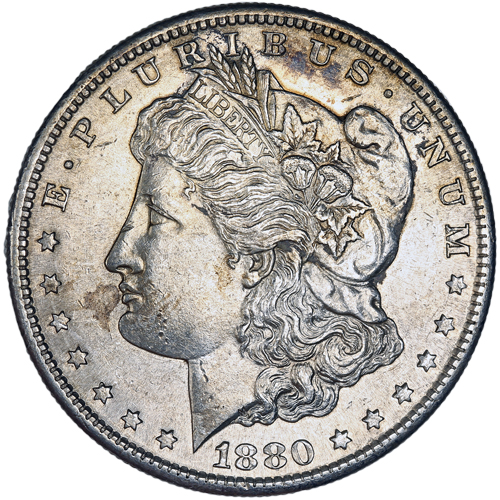 One of the nation’s most popular coin designs is the Morgan Silver Dollar bearing the image of Liberty on one face, and the American bald eagle on the other. Thought to be lost to history by the 1930s, the United States Treasury actually discovered a large deposit of Morgans decades ago. The Morgan Silver Dollar Coin is available today online at Silver.com.

Each of the Morgan Silver Dollar coins available to you today through Silver.com is from the original production run of these coins. The Morgan design for the silver dollar was in use from 1878 to 1904, at which point in time the United States again ceased to have a silver dollar coin in new circulation.

The Morgan Silver Dollar made a brief return to minting in 1921, but the US Mint decided a new design that reflected the isolationist views of the country at the time. As such, the Morgan design was replaced later in 1921 by the Peace Silver Dollar coin.

All Morgan Silver Dollar Coins listed here are in Almost Uncirculated, or AU, condition. Coins in this condition have small traces of wear visible on the highest points. Most collectors cannot easily distinguish an AU coin from an uncirculated specimen, largely because you need to know where the highest design points are to know where to look for the small traces of wear.

On the obverse of all Morgan Silver Dollar coins you’ll find a left-profile portrait of Liberty. Anna Willess Williams is said to have sat through portrait sessions with Morgan to create this profile image of Liberty, who is featured with a wreath crown and headband, as well as 13 stars to represent the original American Colonies.

The reverse of Morgan Dollars includes the American bald eagle. A bit of a cross between the Great Seal of the United States and the heraldic eagle design, this features the bald eagle clutching arrows and an olive branch in its talons.

Morgan Silver Dollar coins were struck by the United States Mint at a total of five different mint facilities open during this period. The Philadelphia Mint struck coins with no mint mark, while the San Francisco, Carson City, New Orleans, and Denver Mints all struck coins with representative mint marks.

We encourage Silver.com shoppers to contact us with questions at 888-989-7223. You can also reach us online using our live chat and email features.