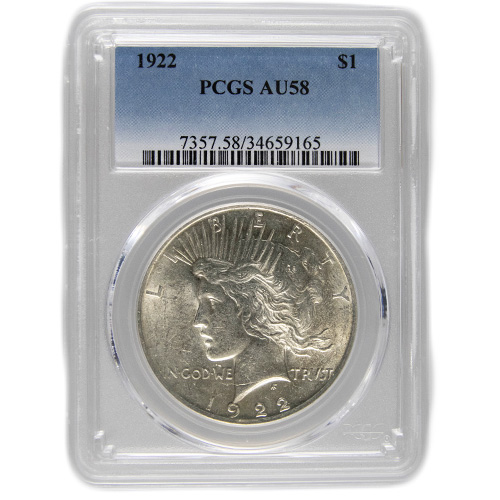 When silver dollar coining resumed, the US Mint turned to the now 7th Chief Engraver of the United States Mint, George T. Morgan, to recreate his die designs from the 19th century so the mint could quickly resume production of silver dollars. By December, however, a new design had been chosen to satisfy public opinion.

The US public wanted a fresh silver dollar design reflective of the nation’s hard-won victory in World War I, its desire for peace, and its view of America as a modern, industrialized nation. The new image of Liberty on the obverse and, more importantly, the eagle on the reverse were created by Anthony de Francisci and reflected those principles.

The obverse of Silver Peace Dollars features a left-profile portrait of Lady Liberty. This design replaces the coronet crown, laurel wreath, and Phrygian cap of past depictions in favor of a towering crown formed by rays of light.

On the reverse side of Silver Peace Dollar Coins, you will find an image of the American bald eagle resting on its perch. Here, the eagle looks back over its shoulder at you as its wings rest at its sides.

These Silver Peace Dollars are available to you in plastic slabs with AU58 grades from the PCGS. Coins in this condition showcase medium or full mint luster, with the most common signs of handling being extremely light or trace signs of friction on the highest relief points. Please note that we do not guarantee the date mark of the coin you will receive. Possible dates include only 1922 to 1926 and 1934 or 1935. If you buy several, you may get matching date marks.