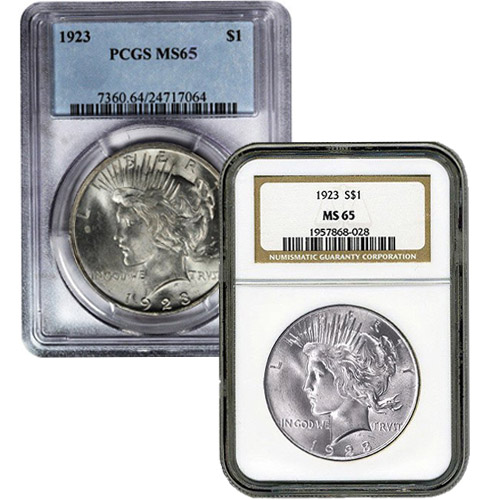 The last circulation silver dollar coin issued by the United States Mint was known as the Peace Silver Dollar. First issued in late December 1921, the US Mint managed to strike one million of these coins in the first year of availability and would continue coinage through 1928. Subsequent legislation resulted in the Peace Silver Dollar’s return in 1934 and 1935 before silver coining ended. The Peace Silver Dollar Coin is currently available to you for purchase online at Silver.com with NGC or PCGS certification.

Morgan Silver Dollar coins had been issued by the United States Mint from 1878 to 1904, but after legislation permitting the coinage ended in 1904 there were no further efforts to coin silver dollars for circulation in the US. The Pittman Act of 1918 mandated that the US Mint coin millions in silver dollars starting in 1921.

On the obverse of the Peace Silver Dollar coin is the left-profile portrait of a modern depiction of Liberty with soft features and a taller crown. Designer Anthony de Francisci used his own wife as a model for this vision of Liberty because of the short timeline the US Mint issued for design acceptance.

The reverse of the Peace Silver Dollar coinage includes a different take on the American bald eagle. Rather than using a design inspired by the Great Seal of the United States of the heraldic eagle, this design featured a bald eagle at rest with its wings at its back as it sits on an olive branch.

These coins earned a Mint State 65 certification from the PCGS or NGC. Coins in this condition have high-quality luster for the strike and mint date, along with light and scattered contact marks outside the primary focal areas. There could also be a few scattered hairlines.