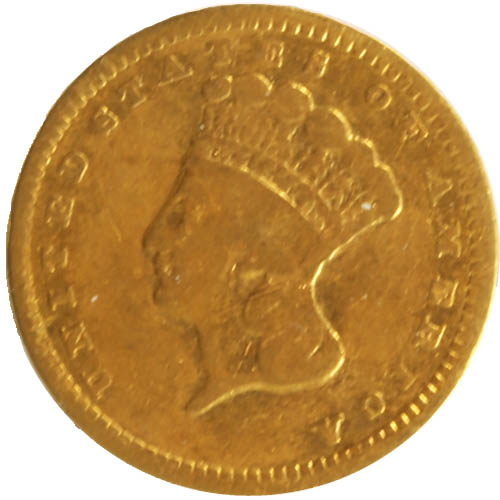 The first gold dollar coins were actually produced at a private mint in North Carolina. Attempts to coin gold dollars were thwarted throughout the 1830s and would not debut from the US Mint until 1849. The first design in the series, featuring Liberty with a crown, was created by James B. Longacre and remained in use until 1854. From 1854 to 1856, Longacre’s Princess Indian design with a smaller head featured on the series. The Type 3 design debuted in 1856 and remained on the coin until its cessation in 1889.

All Pre-33 $1 Gold Indian Princess Coins available here come with a protective plastic flip. This Type 3 design from Longacre included a larger Liberty head image and was a larger, thinner coin to answer the concerns of Americans who believed the coins were too small and easily lost.

On the obverse side of the Pre-33 $1 Gold Indian Princess Coins is a depiction of Lady Liberty in left-profile relief. She is surrounded by the phrase “United States of America” and wears a very ornate crown with feathers.

The reverse face of Pre-33 $1 Gold Indian Princess Coins includes the inscriptions of “1 Dollar” and a date mark inside of a closed wreath. This is the same image that featured on Type 2 and Type 3 versions of the coin. The original US gold dollar coin featured an open wreath that was less ornate than the one found on these coins.

Please feel free to reach out to Silver.com if you have any questions about these Indian Princess Gold Coins. You can call our customer service team at 888-989-7223, chat with us live online, or simply send us an email with your inquiries.