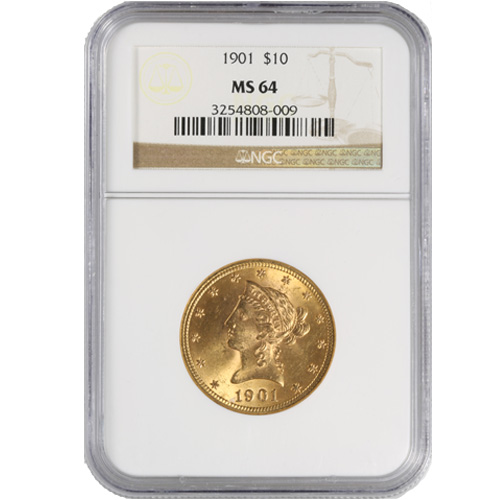 The Gold Eagle coin, known originally simply as the Eagle, is the oldest US gold coin. Introduced into circulation by the US Mint in 1795, the Gold Eagle coins have undergone a variety of designs in the $10 denomination. None of those designs lasted longer than the Liberty Head Gold Eagle coins. Now, Pre-33 $10 Liberty Gold Eagle Coins are available to you for purchase online at Silver.com with NGC certification.

Gold Eagle coins were first produced by the United States Mint in the $10 denomination from 1795 to 1804. These coins featured a right-profile image of Lady Liberty with her hair wrapped around a turban cap, and the design became known as the Turban Head Gold Eagle. However, from 1804 to 1837, no fresh Gold Eagle coins in this denomination were issued.

The US Mint continued producing the Half Eagle and Quarter Eagle coins intermittently during this time period, but it wasn’t until 1838 that the Gold Eagle reentered regular production. It would then be struck in every year for nearly a century from 1838 to 1933 when the US ended the gold standard backing its coinage, resulting in the end of gold coin production.

On the obverse of Pre-33 $10 Liberty Gold Eagle Coins is a design from Christian Gobrecht was the third Chief Engraver of the United States Mint from 1840 until his death in 1844, and he created this left-profile portrait of Liberty with a crown on her head that had the inscription of “Liberty” on it. There are 13 stars around her figure and a date mark at the bottom.

The reverse of $10 Liberty Gold Eagle Coins features the heraldic eagle of the United States. From 1838 until 1866, the US Mint issued the coins without the national motto “In God We Trust” on this side, while all coins from late 1866 to 1907 had the national motto on this face.

These Pre-33 $10 Liberty Gold Eagle Coins are available to you in Mint State 64 condition. The NGC assigns this grade to coins with average luster and strike for the date. The coins may feature several small contact marks, one or two moderately heavy marks, and some small patches of hairlines. Overall the coins are considered to have an eye appeal that is quite attractive.

We encourage Silver.com customers to contact us with questions at 888-989-7223. You can also contact us online through our live chat and email address features.