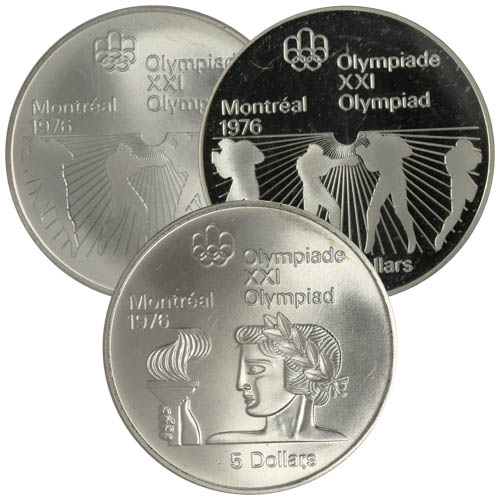 From 1973 to 1976, the Royal Canadian Mint issued 28 silver coins and two gold coins to mark the 1976 Summer Olympic games in Montreal. When the city hosted the 21st edition of the Summer Olympics it marked the first time a Canadian city had hosted an Olympic games. Today, 1976 Silver Canadian $5 Olympic Coins are available to you online at Silver.com with varied designs.

Prime Minister Pierre Elliott Trudeau ordered the Royal Canadian Mint to issue Olympic-themed silver and gold bullion coins to both mark the coming of the 1976 Olympics and help cover the cost of hosting the games in Montreal. The result was seven different design series issued by the mint between 1973 and 1976. In total, there were 28 silver coin issues with 14 apiece for the $5 and $10 silver coins.

All of these 1976 Silver Canadian $5 Olympic Coins are available to purchase today with protective plastic flips. The coins are available to you from random years with varied designs available. We cannot guarantee a particular design for you as all coins are chosen at random once your payment has been processed. If you purchase multiple products through this listing, please keep in mind you could receive several coins with the same designs.

The reverse side of the 1976 Silver Canadian Olympic Coins features designs inspired by the Olympics and Montreal’s hosting duty. The designs were rolled out through seven different concepts that geography, Olympic motifs, Early Canadian sports, track and field sports, water sports, team and body contact sports, and souvenirs. The 1976 $5 Silver Coins feature images of fencing, boxing, the Olympic Village, and the Olympic Flame.

Please feel free to reach out to Silver.com with your questions when you buy silver. You can reach out to us at 888-989-7223, chat with us live online, or simply send us an email with your inquiries.