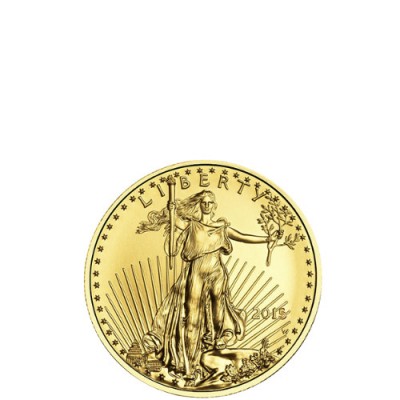 The official gold bullion coin of the United States is the Gold American Eagle. Introduced in 1986, these brilliant coins broke the mold for American gold coin production and are available in a total of four different weights. The smallest of these is the 1/10 oz Gold American Eagle, which is available today on Silver.com from varied years of mintage.

Beginning in 1837, the US Mint officially lowered the metal content of gold coins to .900, although no coins after 1834 had featured anything higher. Throughout the next 100 years of American gold coinage, purity was pinned at .900. When the 1/10 oz. Gold American Eagle was introduced along with its counterparts in 1986, it was the purest gold coin available from US Mint.

On the obverse of all 1/10 oz Gold American Eagle coins is the image of Lady Liberty. Created in 1907 by Augustus Saint-Gaudens, this is considered the greatest American coin design of all time and originally featured on the $20 Saint-Gaudens Gold Double Eagle.

The reverse includes the image of an American bald eagle as it flies over the family nest holding an olive branch. Created in 1986 by Miley Busiek, this is exclusive to the Gold American Eagle coins.

Please don’t hesitate to contact Silver.com with any questions you might have about this listing. Our associates are available at 888-989-7223, online using our live chat, and via email.