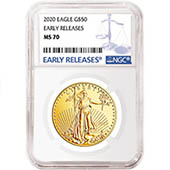 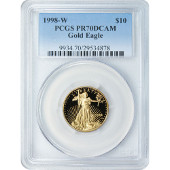 The American Gold Eagle is a gold bullion coin issued by the United States Mint. This coin was first minted as part of the Gold Bullion Act of 1985 and has been in production on an annual basis ever since. Like many other gold coins, it is found in a variety of different sizes which makes it a great coins for both collectors and investors of all types.

Unlike many other gold coins, the American Gold Eagle’s design has been fairly consistent and has not done much changing in its 20+ year history. Its iconic and intricate design is recognized and appreciated by precious metal enthusiasts not only just in the United States but all over the globe.

The design of the coin was actually taken from another popular coin that was in circulation for a short time during the beginning of the 20th century: the $20 Saint Gaudens Gold Double Eagle. Saint Gaudens’ gold eagle design was a favorite of the American people and is even regarded by some today as one of the most beautiful designs to ever be put onto a circulating coin.

The obverse side of the Gold American Eagle coin boasts Augustus Saint-Gaudens’ depiction of a walking Statue of Liberty (commonly referred to as Lady Liberty) in a floor-length gown and hair that seems to be blowing in the wind. In one hand Lady Liberty is holding a torch which symbolizes enlightenment. In the other hand she grips an olive branch symbolizing peace and prosperity. 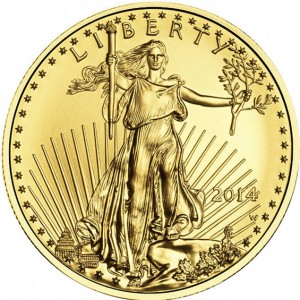 The reverse side of the American Gold Eagle was designed by Miley Busiek and is where the coin gets its name. This side of the coin depicts a majestic American Eagle flying over his nest which contains a female Eagle and her newly born hatchlings. Clutched in the flying Eagle’s talons is another olive branch. The design of this coin is purely American and is something everyone from the United States is sure to appreciate. 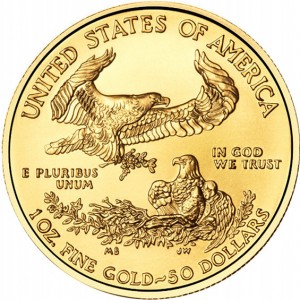 The American Gold Eagle is minted in sizes ranging from as small as 1/10th of an ounce to as large as one ounce. There are four total sizes of the coin with 1/4 ounce and 1/2 ounce versions rounding out the family.

Each coin has a different legal tender denomination and ranging from smallest tenth oz coin to largest one ounce coin the face values are $5, $10, $25, and $50 respectively. Considering the gold content of the coin, each and every version of the American Gold Eagle is worth much more than the face value that is printed on the coin itself.

While many other gold coins available today have purity levels or gold content that is in the 99% range, American Gold Eagles are different in that their gold content is only 91.67% (22 karat).

Due to the fact that gold is such a soft metal, the other roughly 8% of the coin’s composition is made of silver and copper. These two metals do a good job of strengthening the coin and allowing it to be more durable throughout its circulation.

Even though the gold content of the Gold Eagle is not even a whole 92%, its value is usually comparable to coins whose metal content is 99.9% and greater, due to the fact that the overall weight of a Gold Eagle coin is greater than 1 troy ounce, leaving the coin with exactly 1 troy ounce of pure gold content.

Gold Eagles are packaged in tubes and monster boxes when ordering in large quantities. The coins are originally sealed in tubes at the US Mint which are then put into sealed monster boxes for shipment. If you are ordering smaller quantities, gold eagles are shipped in individual protective vinyl coin flips. The mint packaging specs for each particular coin can be found below: