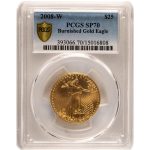 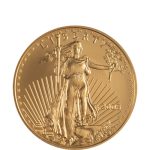 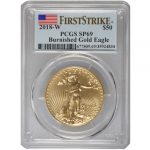 The Gold American Eagle is part of the most popular coin program in the world. As the official gold bullion coin of the United States, the Gold Eagle bears imagery that is recognized throughout the world as being uniquely American. Lady Liberty stands for the freedom of the nation and its open doors for the suffering people of the world. The bald eagle is a symbol of the nation’s power and majesty, as well as its longevity. Both images have appeared on bullion and proof versions of the Gold American Eagle since 1986, but a very unique version was introduced in 2006 with production of the Burnished Gold American Eagle coin. A coin which is proudly offered by Silver.com.

Gold American Eagle Coins were authorized for production by the United States Congress with passage of the Gold Bullion Coin Act of 1985. Under the terms of legislation, the program was to contain four different weights in total (1 oz, ½ oz, ¼ oz, 1/10 oz) and include two different versions initially (bullion and proof). Congress set the face value for the coins as is standard practice with any legal tender issued by the United States Mint.

The first Gold American Eagle coins were produced and made available for purchase in 1986. The bullion coin program was immediately available with all four weights, while the proof version of the coin featured only a 1 oz coin in 1986. The proof program expanded to include the ½ oz weight in 1987, and the ¼ oz and 1/10 oz coins in 1988.

For the 20th anniversary of the American Eagle coin series, which includes the Silver Eagle, in 2006, the United States Mint introduced a new burnished version of the coin. The Burnished Gold American Eagle was introduced specifically for coin collectors. Although the United States Mint already had the proof version of the Gold Eagle available for collectors, the burnished version of the coin had a unique minting process that gave it enhanced value for those numismatists interested in the display and exhibition of visually brilliant coins.

On the surface, the production process of the burnished coin is similar to that of the proof coin. Both products are struck with an eye toward producing a coin with refined visual features and sharper rims. Dig a little deeper though, and you’ll find that the Burnished Gold American Eagle coin undergoes a more specialized striking process to ensure the coin’s visual brilliance is beyond reproach.

The striking of a Burnished Gold American Eagle starts with unique gold blanks, also known as planchets. These blanks start out as the same blanks used for the production of the proof version of the Gold Eagle. The blanks are loaded into a rotating drum before striking to undergo a polishing process. Large volumes of blanks are placed in the drum with a polishing media. Historically, wet sand was used by mints to polish blanks for the production of burnished coins. Today however, the US Mint uses millions of tiny 6 mm balls to polish the blanks.

Continued friction caused by the rotation of the drum and the collision of blanks and balls creates the smooth, matte-like surface found on the burnished coins. Once the rotating drum is done polishing the Burnished Gold American Eagle blanks, each one is removed individually by hand by US Mint handlers wearing white gloves. This is done to avoid defacing the coin’s surface with oils and dirt from human skin. The blanks are then individually loaded into the striking machine to produce the stunning look of the Gold American Eagle.

This gold content is known as a “crown gold” alloy from traditional English production standards. The last coin struck in the US with this purity, prior to the Gold American Eagle, was produced in 1834. In 1837 the government adopted a flat .900 gold content for all gold currency. Like the other versions of the coin, Burnished Gold American Eagle coins are available with the following specifications:

As for the design of the Burnished Gold American Eagle, it features all of the same design motifs found on the other versions of the Gold Eagle. Like its silver counterpart, a historic American coinage design was chosen for the Gold American Eagle. Augustus Saint-Gaudens was hand-picked by President Theodore Roosevelt in 1905 to help revitalize US gold coinage with a brilliant new design.

Saint-Gaudens crowning achievement was the Lady Liberty design that features Liberty in full-length figure, her hair and robe flowing freely in the breeze as she strides forward confidently from the nation’s capital. In her right and left hand are a torch for light, and an olive branch signifying peace; all the things she’ll need to guide the nation toward a peaceful, if unknown, future.

His original design was used on the $20 Gold Double Eagle coin. In circulation from 1907 to 1933, it is considered the finest design on the greatest coin in American history. Saint-Gaudens himself never lived to see his design come to fruition on an American coin though, passing away due to complications from illness just months before the coins were released in 1907.

In Saint-Gaudens’ original design, Liberty was featured striding forward with the US Capitol Building at her feet, the rays of the setting sun at her back, and 46 stars surrounding her along the coin’s rim. In 1912, Congress authorized the addition of two stars to his design to recognize the addition of New Mexico and Arizona to the Union. In order for the image to be used on the Gold American Eagle, two stars were added to recognize the post-World War II addition of Hawaii and Alaska to the Union.

The reverse side of the coin features a family of nesting bald eagles, and was designed by Miley Busiek. In the image, a male bald eagle returns to the nest with branches in its talons. In the nest, a female is depicted standing vigilant guard over the young hatchlings in the nest. Busiek’s design was created in 1986, and is used exclusively on the Gold American Eagle.

On occasion, Silver.com carries Burnished Gold American Eagle coins with certification from either the Numismatic Guaranty Corporation or the Professional Coin Grading Service. These two grading services are recognized around the globe as the gold standard in coin certification. Simply earning certification from either service lends added value and authentication to any coin purchased from Silver.com. Any coin featuring a grade from the NGC or PCGS is shipped to you in a protective plastic slab to ensure the coin arrives in the promised condition certified by either service.

When you are shopping with Silver.com, you have many options available to you in order to complete your purchase of Burnished Gold American Eagle coins. We accept Visa and MasterCard credit/debit cards, with an average processing time of one business day. Bank wire and PayPal fund transfers are now accepted by Silver.com, and often process immediately. Paper checks are also accepted by Silver.com, but take an average of four to six business days to process. Those choosing to pay by paper check or bank wire transfer enjoy a 4% discount compared to other payment methods.

All Silver.com products are available with affordable shipping thanks to our tiered pricing system that determines shipping based upon three different purchase levels. Prices are fixed into three different values, with any purchase exceeding $3,000 in total eligible for not only free standard shipping, but also insurance.

Silver.com purchases are packaged in discreet boxes to ensure safety and discretion during shipping. The United States Postal Service and UPS handle shipping of all Silver.com purchases. In the event that your shipment is lost or damaged, Silver.com will either work with the carrier to locate your package or file an insurance claim on your behalf to secure a refund of your purchase price.

If you have any questions about Burnished Gold American Eagle coins, please feel free to contact a Silver.com associate. You can reach one of our team members on the phone at 888-989-7223, connect with us online using our website’s live chat feature, or simply submit your questions to us via email.