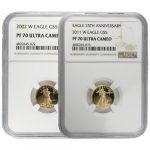 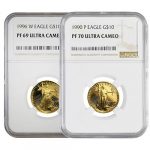 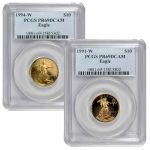 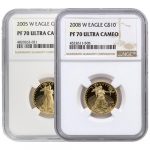 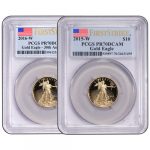 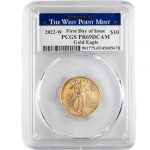 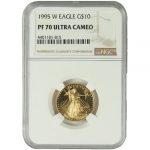 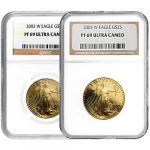 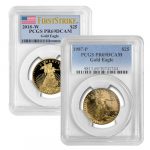 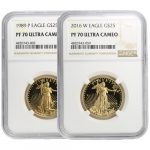 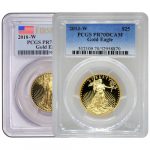 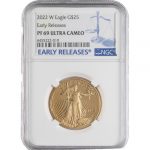 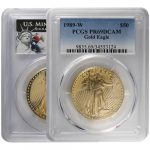 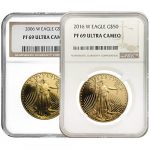 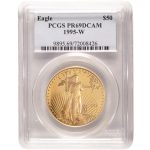 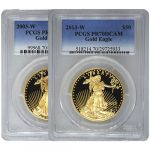 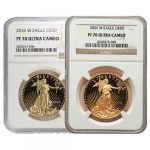 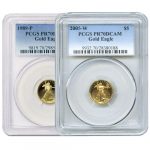 When people think of symbols of the United States of America, there are no images more powerful than the Statue of Liberty and the bald eagle. The former has greeted millions of immigrants from a perch in New York Harbor for almost 130 years. The latter has been the official emblem of the US since 1792. Both are included on the nation’s official gold bullion coin, the Gold American Eagle.

The Gold American Eagle coin program was launched in 1986 following passage of the Gold Bullion Coin Act by Congress in 1985. The program was intended to create an official gold bullion coin of the United States. With passage of the bill, a significant change was made to American minting. In 1834, the US Mint lowered the gold content in US coins from .9167 (22 karat) to .900. Gold content in American coins remained at .900 until 1986 when the Gold American Eagle was introduced in .9167 gold.

Each year the US Mint strikes Gold American Eagle coins in four different weights: 1 oz, ½ oz, ¼ oz, and 1/10 oz. The coins have varying face values that are proportional to the coin’s weight, with the exception of the ¼ oz Gold American Eagle. Face value for the coins is as follows:

Graded Proof Gold American Eagles have a different history in the series than the bullion coin. Proof coins were only struck in the 1 oz weight in 1986. The ½ oz coin was added in 1987, and followed by the ¼ oz and 1/10 oz coins in 1988. Proof Gold American Eagles have been struck in all four weights every year since 1988, with a notable exception coming in 2009 when no proof coins were minted.

Other notable years in the minting of Graded Proof Gold American Eagles include the following:

The design on the Gold American Eagle features Augustus Saint-Gaudens’ depiction of Lady Liberty on the obverse. First used on the $20 Gold Double Eagle in 1907, the image features a full-length figure of Lady Liberty as she strides forward in front of the rising sun. The reverse features sculptor Miley Busiek’s 1986 depiction of a family of bald eagles in its nest.

Much like bullion coins are certified by grading services, proof coins are graded by these same entities. The Numismatic Guaranty Corporation (NGC) and Professional Coin Grading Service (PCGS) are the preeminent services when it comes to grading proof coins. The services each use a grading scale identical to that of bullion coins.

Rather than using the terms Mint State (MS) and a Sheldon scale numerical value, the NGC and PCGS use the terms PF and PR (respectively) to identify a coin as a graded proof with a numerical value. The most commonly assigned grades include PF/PR70 and PF/PR69. Grading a proof coin is different because the production process and final outcome on proof coins varies from that of bullion products.

A proof coin is specifically made for presentation, souvenir, exhibition, and/or numismatic purposes. Proofs have distinguished designs that with greater sharpness, high-wire edges, and brilliant, mirror-like finishes. These visual features of a proof coin are created by striking the coins more than once with the die during production.

When the NGC or PCGS assigns a grade of PF/PR70 to a Proof Gold American Eagle coin, it indicates the coin is perfectly struck and features no visible signs of wear and tear, no contact marks, and no hairlines. A PF/PR69 grade is used to identify coins with original luster, but one or two miniscule contact marks.

In addition to these values, the NGC and PCGS use terms like “Ultra Cameo (UCAM)” and “Deep Cameo (DCAM)” to grade the proof finish of the design. While the NGC uses UCAM and the PCGS uses DCAM, the designation is defined as a “proof coin with a strong, frosted finish on the design and a deeply mirrored, clear background field.”

When you purchase a Graded Proof Gold American Eagle from Silver.com, you are making a secure purchase that is insured against loss. All shipments from Silver.com use discreet packaging to ensure that the contents of the box are not recognizable. Your shipment is insured to protect you against financial loss in the event of damage to or loss of the box during shipping.

If you have questions or concerns about purchasing online or shipping your Silver.com products, we encourage you to contact one of our associates. Silver.com team members are available on the phone at 888-989-7223, online through our website’s live chat feature, and via email.