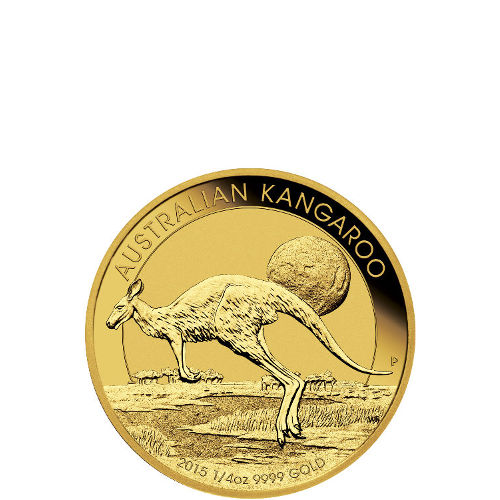 The Gold Australian Kangaroo coinage was originally introduced in 1986 by the Perth Mint as the Gold Australian Nugget. The coin series was intended to display and promote the gold reserves originally found in Western Australia during the 19th century, but the series brought little interest with gold nuggets on the reverse.

Starting in 1990, the Perth Mint swapped out the Gold Nugget theme on the reverse for the Gold Kangaroo, offering a popular native wildlife species for the design which was globally recognized as a symbol of Australia. It also helped align the gold series with the newly introduced Silver Kookaburra, which also bears the imagery of local wildlife on its reverse.

Each of the ¼ oz Gold Australian Kangaroo Coins offered here today are in BU condition. Coins in BU condition show no signs of wear and tear, but they do contain possible flaws. These flaws range from breaks in the luster and spotted surfaces, to contact marks from the production process.

Silver.com cannot guarantee the year of issue you’ll receive with your purchase. Coins in this listing come from 1990 onward, and the specific year you receive will depend upon the availability in our warehouse at the time your order is fulfilled for shipping. Each gold coin will be in BU condition, guaranteed.

On the reverse of the ¼ oz Gold Australian Kangaroo coin you’ll find the image of the largest marsupial species in the world. Kangaroos have a form of motion unlike any other creature, bouncing with great speed using large hind legs and a powerful, muscular tail for balance.

The obverse of all ¼ oz Gold Australian Kangaroo coins features the right-profile portrait of Queen Elizabeth II. Her Majesty’s profile will either feature the third-generation depiction available until 1998, or the fourth-generation depiction from 1998 onward which was created by Ian Rank-Broadley.

Please feel free to contact Silver.com at 888-989-7223 with questions. You can also reach out to us online through our live chat and email address.