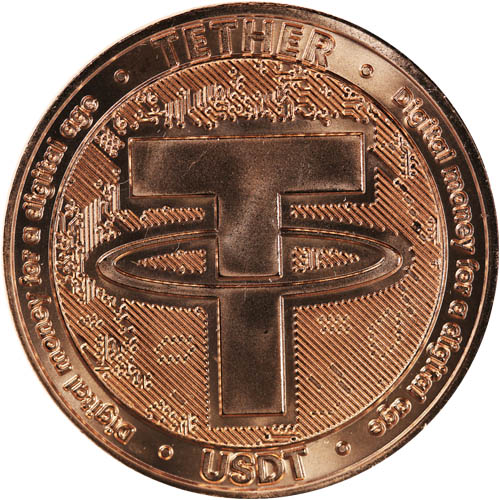 When it comes to cryptocurrency, the market is no longer a one-horse show. Bitcoin launched the concept of cryptocurrencies in 2009. In the decades since, several competitors have emerged to try and mount a challenge to the dominance of Bitcoin. Among the many options out there, you will find USDT Tether as one of the more stable options in this field. Now, 1 oz Copper USDT Tether Crypto Commemorative Copper Rounds are available to you for purchase online at Silver.com.

The release of USDT Tether began with the publishing of a whitepaper online in January 2012. An individual by the name of J.R. Willet described in this white paper the potential to use Bitcoin Protocols to build and release new forms of cryptocurrencies. The company that was eventually formed was first known as Realcoin and the first tokens were, in fact, issued on the Bitcoin blockchain in 2014.

Eventually, the company’s name was changed to Tether, a nod to the fact that Tether tokens are tied in a stable manner to fiat currencies. For example, 1 Tether equals $1 USD. Today, Tether is powered by the Ethereum blockchain and the idea behind issuing a so-called stablecoin is to ensure that $1 in reserves is available for each tether token issued.

On the obverse of 1 oz Copper USDT Tether Crypto Commemorative Rounds is a depiction of the brand logo for Tether. Known alternatively as USDT, its trading name, or USDT Tether, the company’s logo consists of a capital T with a ring around the upper half of the base in the latter. The current market cap for Tether is estimated around $78.3 billion.

The reverse side of Copper USDT Tether Crypto Commemorative Rounds comes with an image of the MJB Crypto Commemorative design. The background field has a similar microchip-themed visual with a square space in the upper left that includes the identifying hallmarks of the round, as well as the MJB initials.

These 1 oz Copper USDT Tether Crypto Commemorative Rounds are available new from the mint with protective flips for individual copper rounds. Multiples are available in plastic tubes of 20 or boxes of 500 rounds.

Silver.com customer service is available at 888-989-7223. You can also chat with us live online or email us with questions.