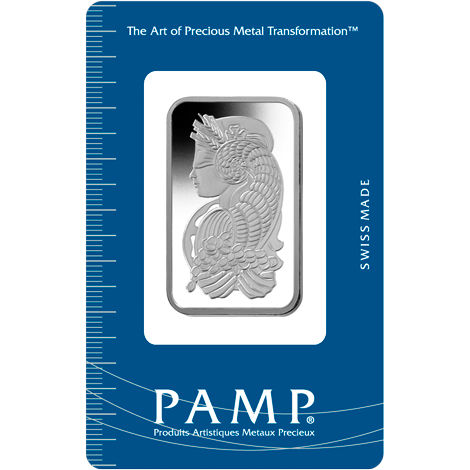 The most popular bullion bar design in the world is the Fortuna imagery used by PAMP Suisse. The foremost bullion brand in the world, PAMP Suisse has a rich history of producing high-quality silver, gold, and platinum products. Right now, Silver.com offers the 1 oz PAMP Suisse Platinum Fortuna bar in brand-new condition, complete with an Assay Card.

In Roman mythology, Fortuna was the goddess of fortune and luck. She was said to be the daughter of Jupiter, the Father of the Gods. Mankind was known to pray to her in times of need, and temples in her name are some of the oldest known to man.

Fortuna was often depicted in imagery similar to that of the modern vision of justice. She is shown with a blindfold over her eyes in many designs, though this was occasionally replaced with a veil or other covering. PAMP Suisse uses their coveted Fortuna design on gold, silver, and platinum bars ranging from 1 Gram up to 1 Kilogram and 100 oz.

On the obverse face of the bar is the image of Fortuna, captured in left-profile. Her eyes are covered with a blindfold, and her cupped hands near the bottom of the bar catch a bounty of coins falling from the cornucopia atop her head.

PAMP Suisse is Switzerland’s leading bullion brand, and is currently part of the larger MKS Group based in Geneva. MKS is a global precious metals and financial services firm, with a presence in major countries around the globe.

Please direct your questions to a Silver.com associate on the phone at 888-989-7223, online using our live chat, and via email.