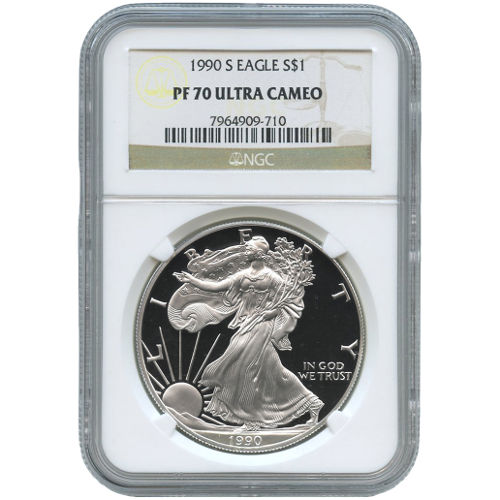 At the same time, the bullion program saw a modest boost of nearly 640,000 coins from the year before, bringing the total mintage in the series for 1990 to 6.5 million coins compared to 5.8 million in 1989. While the bullion program would continue higher in the years to come, the 695,000 coins in the proof version was a high-water mark that would not be seen again in the program until 2001.

Low silver prices were responsible for much of the gains the Silver Eagle series saw in 1990. While the average price throughout the year was lower than 1989, at $4.83 per ounce, it ranged from a high of $5.35 per ounce to a low of $3.95 per ounce. This was one of the lowest silver prices seen throughout the 30-year history of the program.

The 1990-S Proof Silver American Eagles in this listing have perfect PF70 grades from the NGC. Coins such as these exhibit full, original mint luster and no detracting flaws. UCAM coins have strong, frosted finishes on the design set and a deeply-mirrored, clear background field.