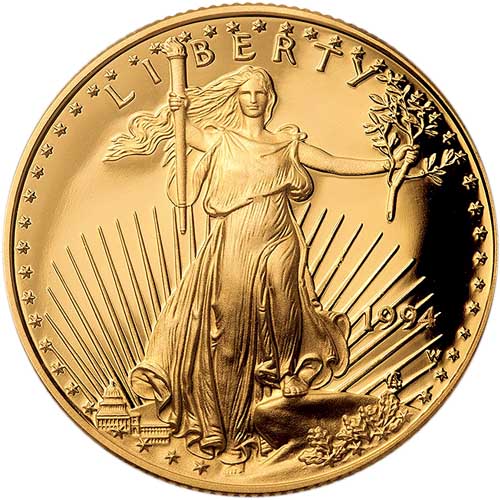 After two years of growing demand, the Gold American Eagle shrunk significantly in 1994. The mintage of the coins was cut by more than 50%, from 480,000 coins the year before to a total of just 221,663 coins for 1994. Three of the four weights in the series, with the exception being the ¼ oz, shrank in demand in 1994, but the 1 oz coin had the greatest decline.

Each 1994 1 oz Gold American Eagle coin in this listing is in BU condition. Coins in this condition feature no signs of wear and tear, however, you may notice minor flaws such as breaks in the luster, spotted surfaces, and contact marks from the production process at the mint.

On the obverse of all 1994 1 oz. Gold American Eagle coins you’ll find Augustus Saint-Gaudens’ memorable Liberty image. Created in 1907, Saint-Gaudens was commissioned directly by President Theodore Roosevelt to create an image for American circulation coins that would revitalize the nation’s currency. His depiction of Liberty was offered from 1907 to 1933 on the $20 Gold Double Eagle coin.

The reverse of all Gold American Eagle coins includes a design found only on these coins, created in 1986 by Miley Busiek. Her creation features an entire family of American bald eagles. While the nest full of hatchlings is guarded closely by a female bald eagle, a male is depicted flying overhead with an olive branch in its talons.

Please don’t hesitate to reach out to Silver.com with questions. You can connect with our customer service team at 888-989-7223, chat with us live online during business hours, or simply send us an email with your questions.