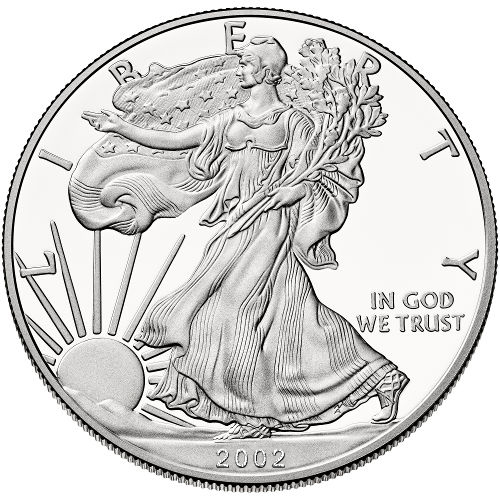 For the first time since 1987, the Silver American Eagle experienced a mintage level in excess of 10 million coins in 2002. While it was not a record breaking year for either the bullion or proof version of the coin, it was a harbinger of things to come for the nation’s official silver bullion coin.

America’s fragile economy in 2001 was shattered by the terror attacks of 9/11, and the carry over into 2002 was impossible to stop. Jittery investors turned to silver and gold products as a means of realizing investment potential as the stock markets shed billions of dollars in value. Silver American Eagle bullion coins shop up from 9.001 million the previous year to 10.5 million in 2002, the highest level since 1987.

Proof Silver American Eagle production shrunk in 2002, as it often does during periods of extreme economic drops. Although the mintage was still very high at 647,342 coins (fifth highest in program history to date), it was down 99,000 coins from the prior year.

On the obverse face of the Silver American Eagle is Adolph A. Weinman’s Walking Liberty design, taken from the Walking Liberty Half Dollar which was in circulation from 1916 to 1947. The design is considered one of America’s greatest ever, and was not widely available for 39 years following the end of its use on the half-dollar coin.

Former-Chief Engraver of the United States Mint, John Mercanti, designed the modernized heraldic eagle featured on the reverse. Mercanti assumed the position of Chief Engraver in 1986, creating this design as his first major project and staying on the job until retirement in 2010.

Please direct any questions to a Silver.com associate at 888-989-7223, or connect with us online using our live chat or email features.