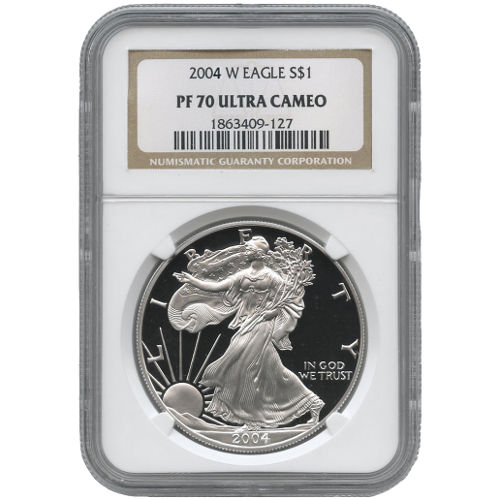 Mintage levels for 2004 ticked upward just slightly to 9.684 million from 9.242 million the year before. The bullion version of the coin accounted for most of the growth, climbing by just under 400,000 coins in total. The 2004-W Proof Silver American Eagle grew in demand by roughly 56,000 coins.

Despite the high sales figures for the Proof Silver American Eagle, final figures remained well below the US Mint’s established maximum of 850,000 coins for the year. Much of this was likely due to the increase in the price of the coins and an increased overall maximum. Proof mintage was increased by 100,000 for 2004, and pricing jumped by $3.95 per coin from the prior year to $27.95.

On the obverse of the coin is the image of Walking Liberty from Adolph A. Weinman’s Walking Liberty Half Dollar coin. The reverse continues to feature the heraldic eagle of the United States as refined by John Mercanti for the Silver Eagle in 1986. Silver prices throughout 2004 hovered around $6.67 per ounce, but enjoyed two brief spikes over $8.00 per ounce.

Each of these 2004-W Proof Silver American Eagle coins earned a perfect PF70 grade from the NGC. Coins in this condition exhibit full, original mint luster and lack any detracting flaws. You’ll notice an Ultra-cameo finish on these coins, indicating the presence of a strong, frosted design finish and a deeply-mirrored, clear background field.

Please direct your questions to a Silver.com associate at 888-989-7223, chat with us live online, or email us with your questions. 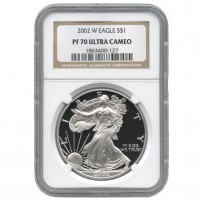