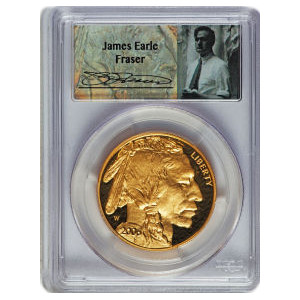 James Earle Fraser’s Buffalo nickel was first introduced in the United States as a 5-cent coin and was minted between 1913 and 1938. On one side of the coin, Fraser used the image of an American Indian chieftain. On the opposite side, a depiction of a buffalo named Black Diamond. The buffalo was a popular resident at New York City’s Central Park Zoo in the early 1900s. This 2006-W Gold American Buffalo Coin with PCGS PR70 and DCAM comes complete with a Fraser label, paying homage to the man whose designs inspired the imagery on this proof coin.

On the obverse side of the 2006-W Gold American Buffalo Coin is Fraser’s image of an American Indian chieftain. Featured in a right-profile portrait, the chieftain is surrounded by engravings that read “Liberty,” “2006,” and a small mint mark “W” below the year of minting. The W indicates the proof was struck at the West Point Mint in New York.

The reverse side of the Gold American Buffalo bears the image of Black Diamond. Standing atop a mound of dirt, the buffalo is surrounded by engravings that read “United States of America,” “E Pluribus Unum,” and the weight, purity, metal content, and face value of the coin.

The United States Mint was established in 1792 when Congress passed the Coinage Act of 1792. A PCGS grade of PR70 indicates that this proof coin has a perfect mint strike. The DCAM label indicates the coin has a “deep cameo.” This means the coin has deeply frosted images and letters that contrast the background fields on the coin.

Silver.com is dedicated to customer satisfaction. If you have any questions about the 2006-W Gold American Buffalo or the online purchasing process, we encourage you to contact our associates at 888-989-7223. You can also use our live chat feature to get in touch.