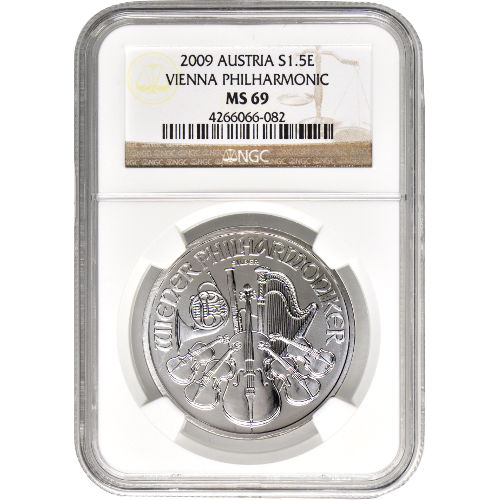 Thomas Pesendorfer’s design features from the gold coin are used on the reverse and obverse of the Silver Austrian Philharmonic coin, as well. His depiction of the pipe organ found within the Golden Concert Hall in Vienna is on the obverse, along with the inscriptions of “Republic of Austria” and “1 Ounce Fine Silver,” both of which are in German.

On the reverse side of each coin is an arrangement of musical instruments, including the harp, violin, cello, flute, bassoon, and French horn, all of which are used by members of the orchestra during performances. The words “Vienna Philharmonic” and “Silver” are engraved on this side in German.

Each coin in this Silver.com product listing features a Mint State 69 grade. Considered near-perfect coins, these products have their full, original luster, and no more than two minor detracting flaws, hairlines, or contact marks. All these blemishes are located outside of the primary focal area of the coin.

The Austrian Mint was founded in 1194 by Duke Leopold V, who used ransom silver paid to him by England’s King Richard the Lionheart to allow safe passage of his armies through Austria.

If you have questions for a Silver.com associate, don’t hesitate to call us at 888-989-7223. We’re also available online through our live chat and email services. If you are interested in similar products, be sure to check out our entire selection of Silver Austrian Philharmonic Coins.