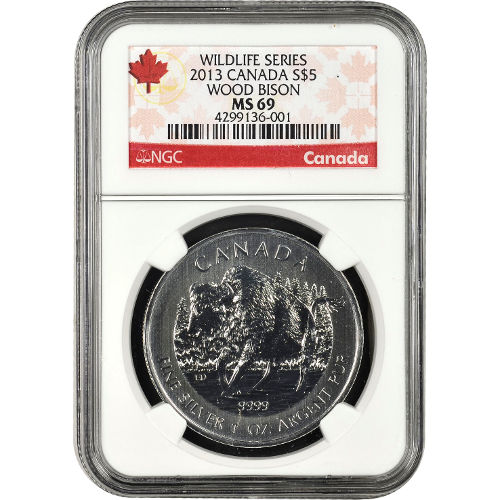 In 2013, the popular Canadian Wildlife Series from the Royal Canadian Mint came to a conclusion with the release of a Wood Bison coin. The final coin in the series, this was the second coin designed by famed Canadian artist Emily Damstra. Right now, the 2013 1 oz Silver Canadian Wood Bison Coin is available on Silver.com in near-perfect condition.

The Canadian Wildlife Series of silver bullion coins from the Royal Canadian Mint consisted of six designs in total. The coins were released two at a time by the RCM over the course of a three-year period. Assistant Engraver William Woodruff, of the Royal Canadian Mint, designed the original four coins in the series. Damstra took over the design process in 2013, creating the images on the Pronghorn Antelope and Wood Bison coins.

Each 2013 1 oz Silver Canadian Wood Bison coin available on Silver.com has a Mint State 69 grade from the NGC. Coins of this condition have their full, original luster, and feature no more than two minor detracting flaws. These coins are considered to be in near-perfect condition.

On the reverse face you’ll find the image of a powerful wood bison as it runs through a shallow riverbed in the midst of a wooded area. The wood bison is native to Canada, and is a subspecies of the greater North American Bison.

The obverse features Susanna Blunt’s depiction of Queen Elizabeth II in right-profile relief. Her Majesty’s effigy was created in 2003, and represents the third-generation image used on modern Canadian bullion and proof coinage.

The Royal Canadian Mint was founded in 1908 following the gold rush in the Yukon Territories at the end of the 19th century. In order to expand its production levels, the mint added a Winnipeg facility to complement its original Ottawa facility in the 1980s.

If you have questions for a Silver.com associate, we encourage you to contact us at 888-989-7223, chat with us live online, or submit an email.