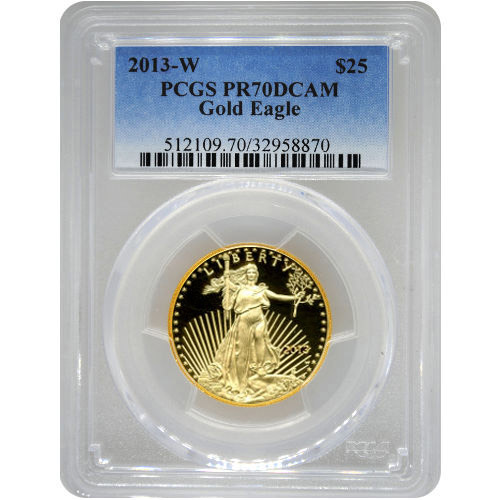 When the Gold American Eagle coin was introduced in 1986 as the official gold bullion coin of the United States, it featured uniquely American images that were recognizable around the globe. The images of Lady Liberty and the bald eagle have been symbols of America for more than two centuries, and have featured on countless coin programs. Right now, the 2013-W ½ oz Proof Gold American Eagle is available on Silver.com.

Proof Gold American Eagle coins bear the image of Lady Liberty as the primary visual design on the obverse face. This image is considered by many to be the finest in the history of American coinage, and is credited with changing the image of American gold coins at home and abroad in the early 20th century.

Irish-American artist and sculptor Augustus Saint-Gaudens was hand-picked by President Theodore Roosevelt in 1905 to revitalize the design of American gold coins. He first created the Lady Liberty image in 1907, but would die just months before it appeared in circulation on the $20 Gold Double Eagle (1907-1933).

Each of the 2013-W ½ oz Proof Gold American Eagles available to you today has a PR70 grade from the PCGS. Each specimen listed here has its full, original mint luster, and no detracting flaws of any kind. The deep-cameo designation highlights the strong, frosted matte finish on the designs, and the deeply-mirrored, clear background field.

On the obverse is Saint-Gaudens’ aforementioned Lady Liberty design. The reverse of the coin features Miley Busiek’s image of a family of nesting bald eagles. Busiek is a noted American designer who has worked on countless private and public sculptures, and her image appears only on the Gold American Eagle series from the US Mint.

Proof Gold American Eagles coins are sought after in anticipation for gold’s continued historic value, which you can monitor minute by minute via our active charts that show current spot gold.

Please direct all of your questions to a Silver.com associate. You can reach us on the phone at 888-989-7223, online using our live chat, or via email.