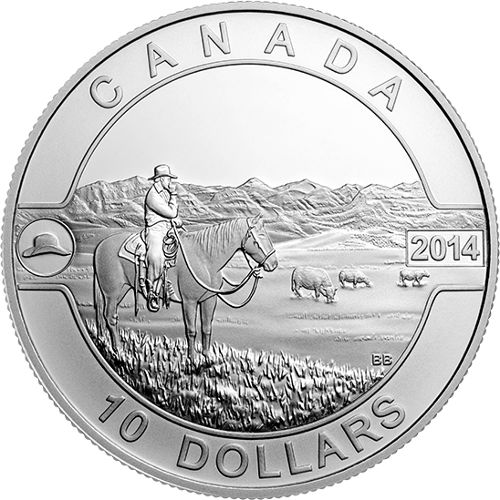 When most people think of cowboys, they associate them with the Wild West of American lore. Outlaws, bars, and guns are the first images in the minds of millions when they envision the cowboy. The nation of Canada produced its own share of cowboys during the 19th and 20th centuries, many of whom risked their lives traversing the Rocky Mountains and settling Canada’s western provinces. The Royal Canadian Mint pays homage to those brave cowboys on the 2014 1/2 oz Silver $10 Canadian Cowboy coin.

The 2014 1/2 oz Silver $10 Canadian Cowboy coin is part of the Royal Canadian Mint’s O Canada series of commemorative coins. The series of coins produced in the O Canada program honor the environment and natural wonder of Canada, as well as the nation’s cultural history. Bernie Brown designed the image of the cowboy featured on the coin, with Susanna Blunt’s image of Queen Elizabeth II used on the opposite side of the coin.

In the image on the reverse, a lone cowboy is seen on horseback atop a hill in the foreground. The cowboy looks out over a valley full of grazing cattle, with the majestic Rocky Mountains depicted in the background. A cowboy hat is engraved on one side of the image, with the year of minting on the other. Other engravings include “Canada” above the image and the face value of the coin ($10) below.

On the revere side, Blunt’s right-profile image of Queen Elizabeth II is featured. Unlike other silver bullion coins from the Royal Canadian Mint, this image of Her Majesty is surrounded by the engravings “Elizabeth II” and “D.G. Regina.” The phrase, in full, means “Dei Gratia Regina” in Latin. Translated in English, the phrase means “By the Grace of God, Queen.”

The United Kingdom minted coins for the whole of Canada at the Royal Mint facility in London prior to the establishment of the Royal Canadian Mint in 1908. Following its completion, the facility not only produced circulation currency for the government, but also processed and refined gold and other precious metals from the Yukon Territories. Today it is regarded as one of the most advanced mints in the world with some of the most beautiful coins.

If you have any questions or need assistance placing your order, be sure to call us at 1-888-989-7223 and we will be happy to help. Inquiries can also be directed towards our staff through email or live chat. If you are interested in these coins then make sure you view the our full collection of Limited Edition Canadian Silver Coins.