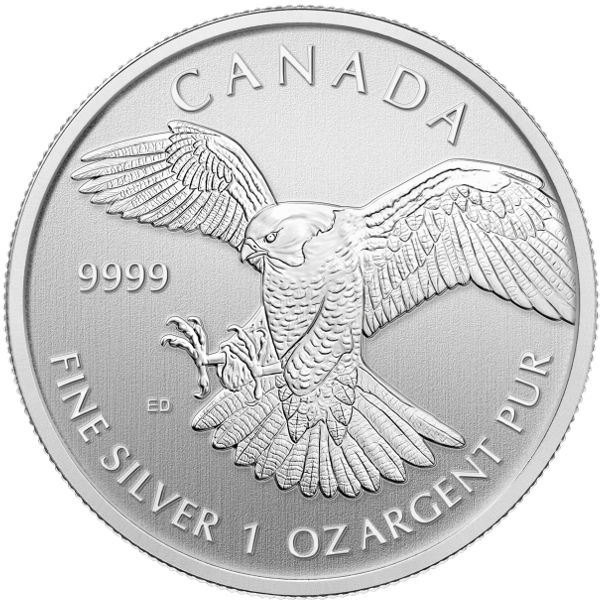 Please note that this product may ship in either mint tubes of 25 or RCM flex strips of 10.

The 2014 Silver Canadian Peregrine Falcon coin was just released this year as the first in a bi-annual silver coin series called the Canadian “Birds of Prey” series. As is the case with most first edition coins, the Peregrine Falcon has seen much popularity not only to the world of collectors, but investors as well due to its high silver purity. Like most of the Royal Canadian Mint’s other silver bullion coins, their “Birds of Prey” series also consists of .9999 fine silver making it one of the purest coins on the market at the moment.

The obverse side of the coin features, as you may have guessed, the Canadian Peregrine Falcon, a native species to Canada. The bird is depicted as if it was in mid flight, attempting to swoop down and land, or perhaps snatch up some food. Also stamped on this side of the coin are the words “Canada” along with “Fine Silver 1 oz Argent Pur.” The reverse side features a profile of Queen Elizabeth II with inscriptions for the mintage year and its face value of 5 Dollars.

As the name of the series suggests, each coin is set to feature a different “predatory” bird of Canada. While the 2014 1 oz Canadian Silver Peregrine Falcon is a popular coin, it has been limited by the RCM to not exceed more than 1,000,000 coins.

For any further information you may require about this silver coin or any of our products we can be reached at 888-989-7223 Mon-Fri 8AM-5PM CST. Our customer service staff can also be reached via email or live chat as well. 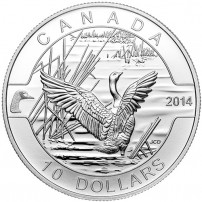