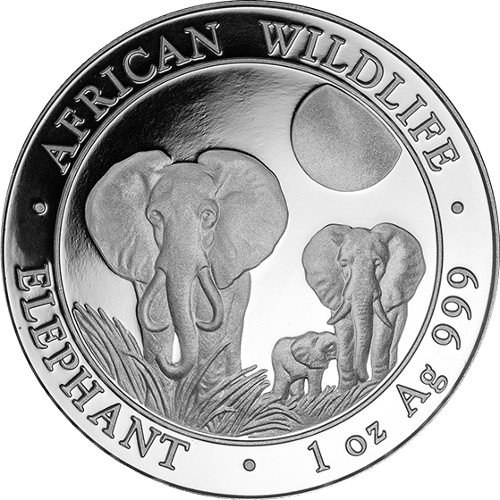 The wilds of Africa can prove a harsh environment for any creature on Earth, mammal, reptile, or human. The elephant is one of the world’s largest land animals and is native to large swaths of Africa. These massive creatures have been hunted for centuries for their ivory tusks, pushing them toward extinction. The Bavarian Mint in Germany strikes the Silver Somalian Elephant Coins on behalf of the Somali Republic. Today you can purchase the 2014 1 oz Silver Somalian Elephant Coins from Silver.com in brilliant uncirculated condition.

On the reverse side of the 2014 1 oz Silver Somalian Elephant Coin is the stunning image of three elephants trudging through the bush. Two large adults are visible in the foreground, while a third elephant is visible in the distance. Rising above the elephants in the background is the moon. Engravings on this side include “African Wildlife,” “Elephant,” and the weight, purity, and metal content of the coin.

The obverse side of the coin bears the heraldic symbol of the Somalian Republic. On the coin, the nation’s coat of arms is in the middle, flanked by two large, wild felines. Engravings on this side of the coin include “Somali Republic” and the face value of the coin.

The Bavarian Central Mint is located in Munich, Germany, and has been in operation since 1871. It is one of four prominent German mints to produce commemorative and circulation currency for nations in Europe and around the world. All coins from the Bavarian Central Mint bear a “D” mint mark. The 2014 1 oz Silver Somalian Elephant coin is considered legal tender in Somalia and has a 100 Shillings face value.

If you have any questions about this 2014 1 oz Silver Somalian Elephant Coin or the online purchasing process, don’t hesitate to call our associates at 888-989-7223. You can also contact us online using our live web chat feature. 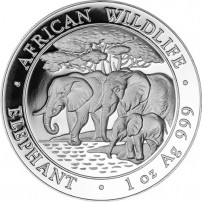 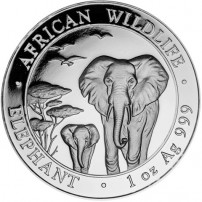