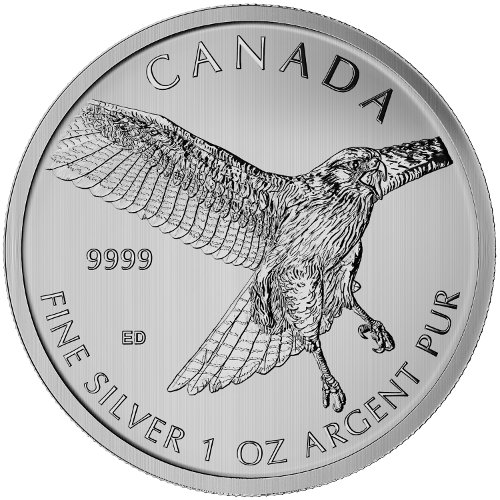 Red-tailed hawks were previously featured on Canada’s 50-cent coins minted in 2000. Now, the bird of prey returns to the reverse side of the 2015 1 oz Silver Canadian Red-Tailed Hawk Coin. On the obverse side of the coin is the traditional image of Her Majesty, Queen Elizabeth II, as featured on all Canadian coins produced by the mint.

The reverse side of the 2015 1 oz Silver Canadian Red-Tailed Hawk Coins features the image of a lone hawk. Engravings include the year of minting and the word “Canada.” On the obverse side of the coin is the iconic right-profile image of Queen Elizabeth II, as designed by artist Susana Blunt. The queen’s image is encircled by the engravings “Elizabeth II” and the face value (5 Dollars).

The Royal Canadian Mint was founded in 1908 to process gold and other precious metals discovered in the Yukon Territories in the late 19th century. Initially used to produce gold bars to fund the British Empire’s war efforts during World War I, the mint has evolved into an entity of the Canadian government and has become a leading innovator in coin design, quality, and security.

These coins are packaged in Thermatron sheets of 25, and mint-sealed monster boxes of 500 coins (20 sheets of 25).

If you have any questions about the 2015 1 oz Silver Canadian Red-Tailed Hawk Coins, other Silver.com products, or the online shopping process before placing an order, don’t hesitate to call our associates at 888-989-7223. Help is also available online using our live web chat feature.