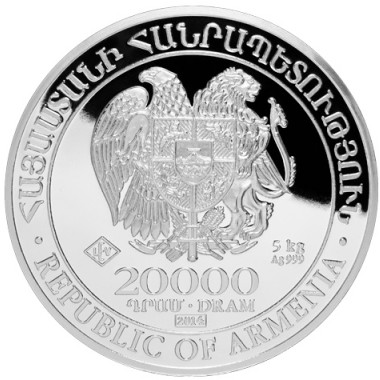 There are few stories from the Christian bible more popular than the tale of Noah’s Ark. Due to its deep connection to the religion and the tale of Noah’s Ark, the Central Bank of Armenia has chosen to pay homage to this narrative on the 2014 5 kilo Silver Armenian Noah’s Ark coin. The coin has become the official silver bullion coin of the nation and stands next to coins such as the Canadian Maple Leaf and Silver American Eagle in terms of brilliance and quality.

The story of Noah’s Ark is found in the book of Genesis in the Christian bible. Upset with mankind’s indecent behavior and lack of faith, God punishes the Earth with a massive flood meant to cleanse the planet. Noah and his family are selected by God to build a huge ark and collect two of every animal in the world. Salvation is offered to his family along with the task of rebuilding humanity and the animal world.

Armenia is deeply connected to this tale because Mount Ararat, the resting place of the ark, was once located within its borders. 20th century wars redrew these borders, but Mount Ararat’s traditional home is within the nation of Armenia. Additionally, Armenia was the first modern nation to declare Christianity its official religion.

The obverse of the 2014 5 kilo Silver Armenian Noah’s Ark coin features the national coat of arms of Armenia. This imagery is surrounded by the engraving “Republic of Armenia,” which is written in both English and Armenian. There are also engravings of the year of minting, weight, purity, and metal content on this side.

If you have any questions about the 2014 5 Kilo Silver Armenian Noah’s Ark Coins before placing your order, please call Silver.com at 1-888-989-7223. We will also be glad to assist you online through live chat and email. Make sure you look over our entire collections of Foreign Silver Coins for more from this series.