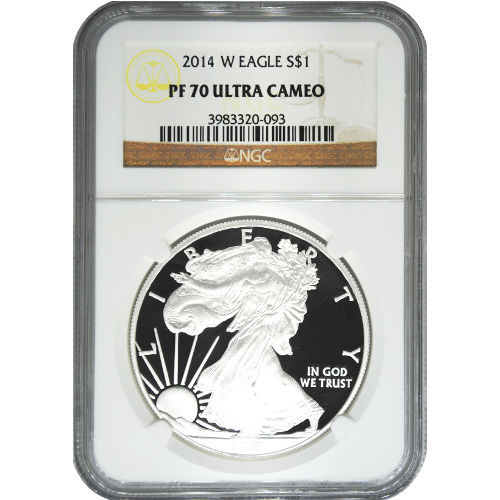 Silver American Eagle coins were originally introduced in 1986 in a bullion and proof finish, but it was another 20 years until the burnished coin appeared. Produced solely at the US Mint’s New York facility, these coins are struck in limited numbers each year.

The burnished coining process is similar to that of the proof production process. While proofs are made using standard blanks and a burnished die, the Burnished Silver American Eagle is struck using a standard die. Burnished blanks are hand loaded into the coining press by workers at the facility.

On the reverse side of the Burnished Silver American Eagle is Adolph A. Weinman’s Walking Liberty image. Weinman’s creation is considered one of the finest to ever grace the surface of an American coin. The obverse side of the coin bears the image of the heraldic eagle. John Mercanti, US Mint chief engraver, designed the image specifically for this coin series.

Each coin in this product listing has a perfect grade from the NGC. Not only do these coins have their full, original luster, but they are also free of blemishes, contact marks, or detracting flaws. UCAM identifies the finish as strong and frosted, with a deeply mirrored, clear background.

The United States Mint struck burnished coins from 2006  to 2008, and has continued every year since 2011 following the coin’s return from a production hiatus. If you have questions for a Silver.com associate, simply call us at 888-989-7223 with those inquiries. We’re also available online using our live web chat and via email.