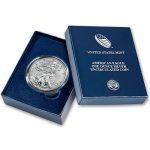 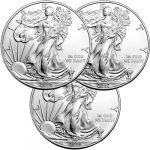 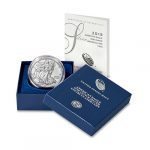 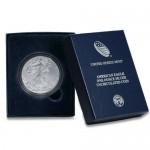 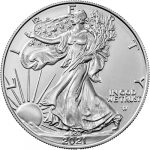 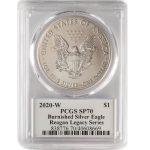 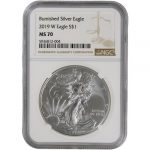 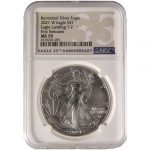 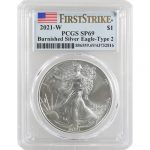 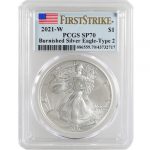 The Silver American Eagle coin program is the official silver bullion coin of the United States of America. Struck on an annual basis since 1986, the series consists of bullion, proof, and burnished coins. Of those three products, the burnished coin is the newest addition to the series.

When Congress passed the Liberty Coin Act of 1985, the Silver American Eagle coin series was set in motion. The bill allowed for the release of silver stores from the Defense National Stockpile to jump start production of the nation’s official silver bullion coin. Unlike the Gold American Eagle coin program, the Silver Eagles are available in only a 1 oz weight.

In 2006, on the 20th anniversary of the coin’s introduction, a brand-new burnished coin was added to the series. While investors and collectors alike clamored for the bullion and proof coins, the burnished coin was created with collectors in mind. The unique production process involved in the minting of the Burnished Silver American Eagle created a stunning finish that was ideal for display and exhibition of these coins.

The designs minted onto the obverse and reverse of the Burnished Silver American Eagles is no different than those featured on the bullion and proof coins in the series. For the obverse side of the coin, the United States Mint chose Adolph A. Weinman’s classic image of Lady Liberty. Designed in 1916 and featured on the Walking Liberty Half Dollar until 1947, Weinman’s image is considered one of the greatest to ever grace the surface of an American coin.

In his depiction of Walking Liberty, Weinman showed Lady Liberty walking toward the setting sun. With her right hand outstretched and the American flag draped over her shoulders, the depiction represented the determined march of the nation toward a brighter future. Engravings on this side of the coin include “Liberty,” “In God We Trust,” and the year of minting.

On the reverse side of each coin is the image that gave the series its name: a bald eagle. US Mint chief engraver John Mercanti was tasked with creating an image in 1986 for use on the Silver American Eagle coin. His creation was the heraldic eagle, a common symbol within the federal government and the nation’s official emblem since 1792.

The image of the heraldic eagle features a bald eagle set behind a shield. In its right talon are the arrows of war, while its left talon clutches the olive branch of peace. Directly above its head, between its widely spread wings, are 13 stars representing the original American Colonies. Engravings on this side include “United States of America,” as well as the weight, purity, metal content, and face value of the coin.

The burnished coin, also known as an uncirculated coin, was produced from its introduction in 2006 until 2008. The coin program was put on a two-year hiatus following 2008, with no coins produced in 2009 or 2010. Burnished Silver American Eagles have been struck every year since being reintroduced in 2011.

Mintage during those first four years was as follows:

The Burnished Silver American Eagles struck in 2011 represent the only unique year in the coin’s brief production history. All burnished coins are struck at the West Point Mint in New York and bear a “W” mint mark. In 2011, 409,809 coins were struck at West Point and engraved with a “W” mint mark. An additional 99,882 burnished coins were struck that same year at the San Francisco Mint, bearing an “S” mint mark. These coins were sold as part of the 25th Anniversary Silver American Eagle coin set.

The Numismatic Guaranty Corporation and the Professional Coin Grading Service are the two major grading services in the precious metals market, and follow some the strictest guidelines in grading among any of their competitors. Burnished Silver American Eagle coins are available from Silver.com in brilliant uncirculated and Mint State 70 conditions.

Burnished Silver American Eagle coins are struck using a unique coining process at the US Mint. Rather than using a burnished die cast, individual burnished blanks are hand loaded into the coining press and struck multiple times with a standard die cast to create a stunning finish on each side of the coin.

Investing in precious metals through Silver.com is an investment in safe and secure online shopping. Every order processed on Silver.com in excess of $3,000 is shipped for free and covered, at no additional cost, under our in-house insurance policy. Customers who purchase Burnished Silver American Eagle coins in orders under $3,000 have access to affordable, flat-rate shipping from the United States Postal Service or UPS.

Your order from Silver.com will ship in discreet packaging to protect the contents within from identification. We fulfill all orders upon receipt of payment. Credit cards, debit cards, and PayPal payments are instantaneous upon checkout, while paper checks require 4 to 6 business days to clear.

We encourage all Silver.com customers to ask questions when they arise. You can reach a Silver.com associate on the phone at 888-989-7223, online using our live web chat service, or via email.