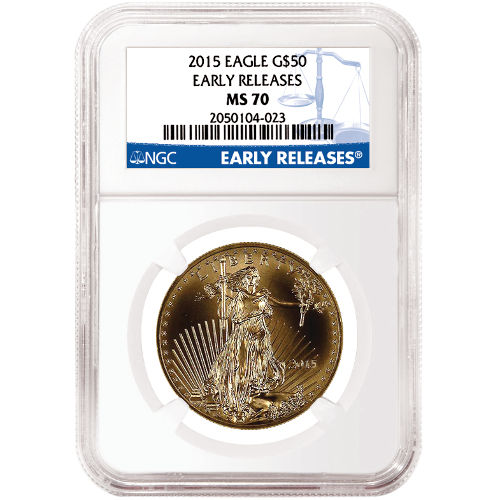 The Gold American Eagle is the official gold bullion coin of the United States government. America’s early leaders selected the bald eagle as a national emblem in 1792 because of its longevity, majesty, and power. All of these traits were characteristics that the Founding Fathers believed the American people shared with the iconic bird. Today, you can own the 2015 1 oz Gold American Eagle Coin with a Mint State 70 grade from the Numismatic Guaranty Corporation. These coins come from the early release batch, meaning they arrived at the depository within 30 days of their release.

With passing of the Gold Bullion Coin Act of 1985, Congress authorized the US Mint to produce an official gold bullion coin for the nation. Imagery on the coin was provided by sculptor Miley Busiek and a pre-existing image artist Augustus Saint-Gaudens. While Busiek’s imagery was brand new at the time, Saint-Gaudens’ Lady Liberty first appeared on the $20 Saint-Gaudens gold coin as commissioned by President Theodore Roosevelt.

On the obverse side of the coin is the image of Lady Liberty. She can be seen emerging from the rising sun on the coin, with a torch in her right hand and an olive branch in her left. Stars are engraved around the rim on the coin’s obverse side, representing the 50 US states. Additional engravings include “Liberty” and the year of minting, 2015.

The reverse side of the 2015 1 oz Gold American Eagle coin includes Busiek’s image of a family of eagles. In the image, a male eagle returns to the nest with an olive branch in its talons. The female is visible as a guardian, watching the nest and its hatchlings. Engravings include “United States of America” above the family, and the weight, purity, and metal content below. The eagles are flanked by the engravings “E Pluribus Unum” and “In God We Trust.”

Congress authorized the establishment of the US Mint with the Coinage Act of 1792. The facility operates four mints across the country to produce gold and silver bullion coins, as well as circulation currency and collectible coins. These 2015 1 oz Gold American Eagles have an MS70 grade from the NGC, meaning they have a perfect mint with no abrasions and a brilliant strike. Combined with their status as early release coins, they are among the most popular in the series and held in high-regards by numismatists and coin collectors alike.

Silver.com wants you to be happy with each and every purchase. We invite you to call our associates at 888-989-7223 with any and all questions you may have before placing your order. Feel free to use our live chat feature located on the contact us page for further assistance.