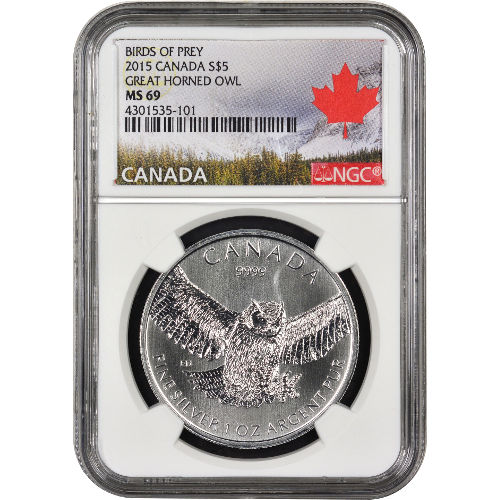 Canada’s Birds of Prey Series from the Royal Canadian Mint was met with a warm, positive reception from investors and collectors alike. With relatively limited mintages of one million per design, and one-time production for each design, the coins were must-have for serious numismatists. Today, the 2015 1 oz Silver Canadian Great Horned Owl is available on Silver.com in near-perfect condition.

The 2015 1 oz Silver Canadian Great Horned Owls available on Silver.com in this listing are near-perfect specimens. Coins with an MS69 grade have their full, original mint luster and a maximum of two minor detracting flaws.

On the reverse is Damstra’s design of a Great Horned Owl, featured with its wings outstretched as it swoops down on its prey from above. This bird of prey is the most familiar aerial predator in Canada, and is well known for its stealth.

The obverse side of the coin features the right-profile portrait of Queen Elizabeth II, created in 2003 by Susanna Blunt. Engravings on this side include “Elizabeth II,” “2015,” and “5 Dollars.”

We encourage all Silver.com shoppers to contact our customer service team with questions about this and other Birds of Prey silver bullion coins. You can reach us at 888-989-7223, online using our live chat, and via email.