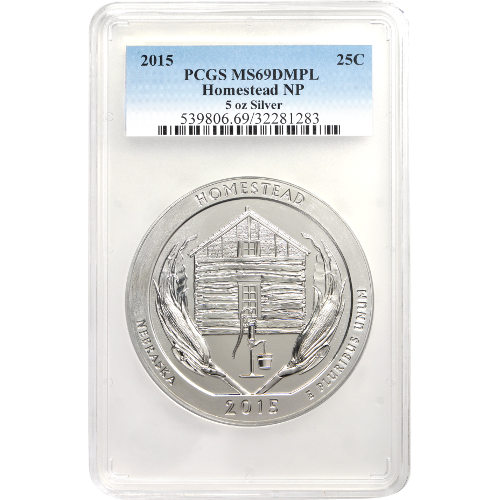 The Homestead Act of 1863 paved the way for the nation’s westward expansion. President Abraham Lincoln signed the bill into law, authorizing the acquisition of free land in the West to any American willing to live on the land for a set number of years while improving and cultivating the surrounding area. This moment in American history is captured on the 2015 5 oz Homestead ATB Silver Coin from Silver.com.

The America the Beautiful coin series was introduced for the first time in 2010. The 56-coin series is scheduled to run through 2021, with five new coins released each year featuring new images of monuments, moments, and people from American history. The series will eventually represent all 50 US states, the nation’s five territories, and the District of Columbia.

On the obverse side of each of these coins is the image of the first cottage built on land secured through the Homestead Act. Located in Nebraska, the small cottage, with its water pump and surrounding wheat stalks, represents the necessary factors for survival on the Plains: water, food, and shelter.

The reverse side of every coin bears imagery found on the common US quarter. A left-profile bust of President George Washington is featured, surrounded by engravings of “United States of America,” “In God We Trust,” and “Liberty.”

Each coin in this listing is available in near-perfect condition, with its full, original luster visible and no more than two minor blemishes on the coin’s surface. The deeply-mirrored, proof-like finish is rare on a bullion coin.

If you have questions for a Silver.com associate, please call us at 888-989-7223. We’re also available online through our live chat and via email. If you are interested in similar products, check out the Mexican Silver Libertads page of Silver.com.