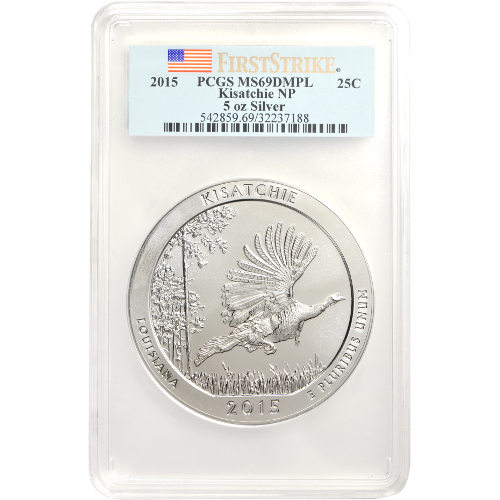 Any quantity available for $20.50 per oz over spot!

As the America the Beautiful coin series entered its sixth year of production in 2015, the coins in the program saw the highest mintage levels to date since the program was introduced in 2010. The Kisatchie National Forest coin, representing Louisiana, had the highest mintage to date with a total of 776 million coins produced. Right now, a near-perfect 2015 5 oz Kisatchie ATB Silver Coin is available on Silver.com.

America the Beautiful is a 56-coin commemorative series honoring the national forests, parks, and monuments of the US. Launched in 2010, by the time the series ends in 2021 a representative location from each of the 50 US states, 5 overseas territories, and the federal district of Washington DC will be represented on a 5 oz quarter.

Kisatchie National Forest is located across a number of parishes in central and northeast Louisiana. In addition to housing a large number of the regions longleaf pines, the forest is also home to some of the oldest rock formations in the state.

Each coin in this Silver.com product listing was given an MS69 grade by the PCGS. This means that each has its full, original luster, as well as a maximum of two minor detracting flaws. The deeply-mirrored finish indicates a background field that is highly reflective, and more commonly found on proof coins.

First Strike labels designate that the coins were received by PCGS within the first 30 days of the coin’s release.

On the reverse side of the coin you’ll see some of the region’s native water fowl taking flight from Louisiana’s bayous in the northeast. The obverse bears the image of President George Washington, as refined in 1932 by artist John Flanagan.

If you have questions about these coins, reach out to a Silver.com associate at 888-989-7223. We’re also available online through our live chat and email services. If you are interested in similar products, be sure to check out our Silver Bullion page.