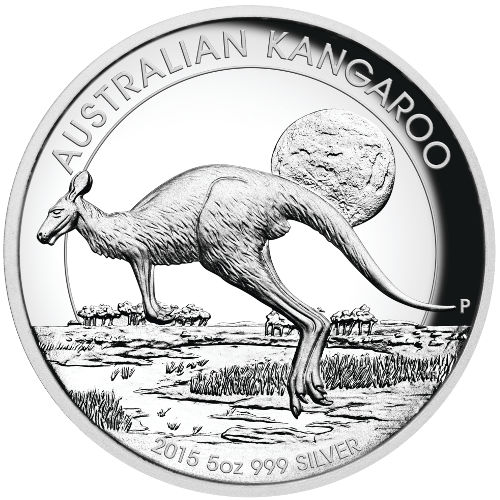 Few coin designs from Australian minting facilities are more popular than the kangaroo. While the Kookaburra and Koala have longer histories at the Perth Mint, the release of kangaroo proof coins is always met with great enthusiasm by investors and collectors both inside and outside of Australia. The 2015 5 oz Proof Silver Australian Kangaroo Coin is currently available for purchase on Silver.com.

Kangaroos are commonplace on the Australian continent, with the government recording significant growth in the population of the species since 2010. An estimated 34 million kangaroos are living in Australia, with the vast majority falling into one of four primary subspecies.

The western grey and eastern grey are the most common in encounters by humans, but the antilopine and red kangaroo also have significant populations on the continent. Kangaroos are not strictly limited to Australia, but the vast majority of the global population is located there.

On the reverse of each coin you’ll find the iconic image of a red kangaroo hopping through the Outback, with the moon rising high above as the backdrop for the design. Engravings include the name of the coin series and the coin’s year of release, weight, purity, and metal content.

The obverse features Ian Rank-Broadley’s 1998 depiction of Queen Elizabeth II. Her Majesty’s effigy graces the obverse of all Australian currency, with this particular version representing the Queen’s fourth-generation portrait.

Australia’s Perth Mint is now owned by the state of Western Australia, but originally opened in 1898 as part of the Royal Mint system under British colonial control. The Currency Act of 1965 grants legal tender status to all Perth Mint coins, even though it is not affiliated with the Royal Australian Mint.

Please feel free to contact Silver.com if you have any questions about these high-relief proofs. You can reach one of our team members on the phone at 888-989-7223, connect with us online using our live web chat, or email us.