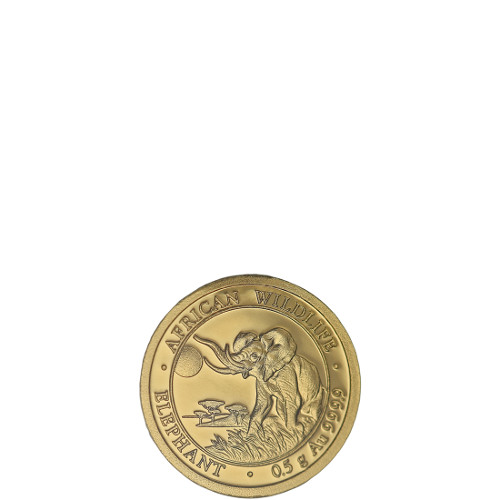 Designs on the Gold Somalian Elephant always focus on the African elephant species, the world’s largest land mammal. However, while the motif remains that of an elephant in its natural habitat, the specific features change from year to year. Some designs feature a herd of elephants or a mother and calf, while others feature just one large elephant.

On the obverse of the 2016 ½ Gram Gold Somalian Elephant is the unique design used only in 2016. It features a massive elephant in the foreground standing amidst the tall grass at the banks of a body of water. Engravings read “African Wildlife,” “Elephant,” and “0.5 G Au 999.9.”

The reverse of all Gold Somalian Elephant coins features the coat of arms for Somalia. The nation’s crest includes a heraldic shield in the center held up by one leopard on either side, and a single star on a background of horizontal lines on the shield’s face. Engravings on this side include “Somali Republic,” “2016” split on either side of the shield, and “20 Shillings.”

Each of these 2016 ½ Gram Gold Somalian Elephant Coins is in BU condition. Coins in this condition exhibit no signs of wear and tear, though you may notice minor flaws such as breaks in the luster, spotted surfaces, and contact marks.

All Somalian Elephant coins are produced by the Bavarian State Mint. Opened in Munich in 1158, it is one of Germany’s oldest mints and is owned today by the state government in the Free State of Bavaria.

If you have any questions, please don’t hesitate to ask. You can reach our customer service team at 800-276-6508, connect with us online through our live web chat, or send us an email.