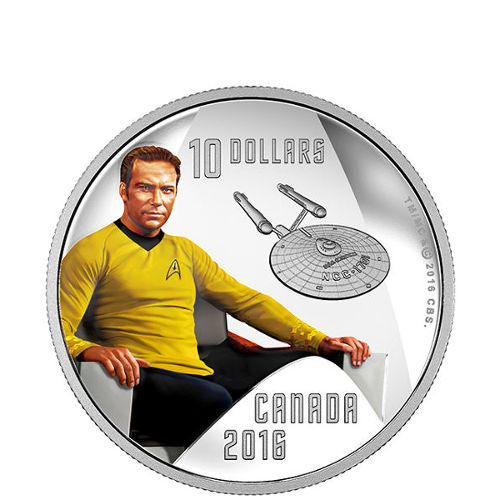 Star Trek fans everywhere will be enthused by a new collection of silver coins available from the Royal Canadian Mint to mark 50 years of “going where no man had gone before.” Gene Roddenberry’s Star Trek franchise launched on television in 1966, eventually spawning six additional TV series and 13 feature films. This new 2016 ½ oz $10 Silver Canadian Star Trek Captain Kirk coin, available on Silver.com, commemorates one of the show’s most memorable characters.

The very first series from Roddenberry was known as The Original Series, and though it was only on television for three years it managed to spawn the series’ most memorable characters. Among them was Captain Kirk, played by Canadian actor William Shatner.

The cast of characters on The Original Series gained a cult following after the show was cancelled in 1969, powering Star Trek forward in the decades to come with countless feature film releases and related television series.

Each 2016 ½ oz $10 Silver Canadian Star Trek Captain Kirk coin in this Silver.com listing is the first release in a series of four that will eventually feature portraits of other famous characters from The Original Series, including Leonard Nemoy as Spock.

On the reverse side of the coin you’ll find a colorized image of William Shatner as Captain James T. Kirk, wearing his golden uniform and sitting in his chair on the bridge of the Enterprise. To the right of his colorized portrait is a detailed rendering of the U.S.S. Enterprise, his Starfleet command ship.