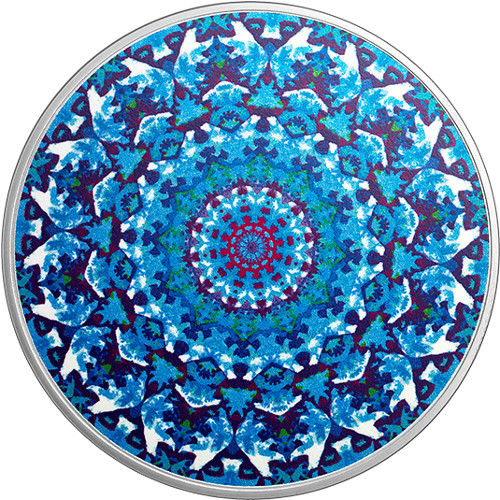 There are few creatures in this world as majestic and powerful as the polar bear. One of the more beautiful silver coins from the Royal Canadian Mint features the wonder of a kaleidoscope combined with the impressive form and figure of the polar bear. The 2016 1 oz Proof Silver Canadian Canadiana Kaleidoscope Polar Bear coin is available for purchase online today at Silver.com.

The new 3-coin program known as Canadiana Kaleidoscope uses various shades of translucent blue, tumbling glass, and repeating patterns to create the image of various polar bears dancing around the reverse side of the coin’s face.

Subsequent releases in this program will include the common loon and the sugar maple leaf, each of which will feature its own unique kaleidoscope design. Additionally, all the coins will have reverse designs that cover the entire reverse of the coin, from edge to edge, with no border.

Polar bears are carnivorous bears living within a native range that consists primarily of the Arctic Circle. The bears are the only marine-based bears who swim regularly and move across open water and ice flows. The bears live mostly on a diet of seals, supported by other sea life as a source of food.

The reverse of the 2016 1 oz Proof Silver Canadian Canadiana Kaleidoscope Polar Bear coin features the amazing imagery of countless polar bears in various positions spread across the reverse face. The kaleidoscope imagery draws the eye in while the beautiful hues of blue capture the imagination.

The 2016 1 oz Proof Silver Canadian Canadiana Kaleidoscope Polar Bear coins ship to you housed in a maroon clamshell, the iconic display case of the Royal Canadian Mint’s proof coinage. Your clamshell and coin ship to you inside of a black beauty box to protect the condition of all pieces.

Royal Canadian Mint silver and gold coins are produced at its original location in Ottawa, opened in 1908, or at the newer facility in the city of Winnipeg. The Royal Canadian Mint is one of the world’s finest operational mints today.

We encourage all Silver.com customers to contact us with questions. You can reach us at 888-989-7223, chat with us live online, or send us an email. As always, you can find the spot price of gold and silver on our website too!