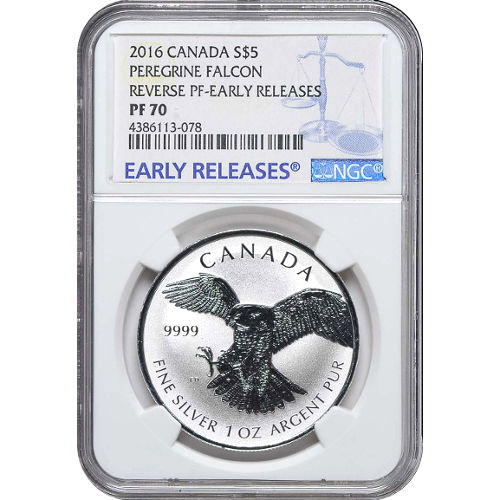 The Birds of Prey Series from the Royal Canadian Mint was one of many immensely popular, wildlife-themed coins released in recent years by the mint. It featured four designs in total, released between 2014 and 2015. Now, those design return on the 2016 1 oz Silver Canadian Peregrine Falcon Reverse Proof Coin series, available on Silver.com.

The new Birds of Prey Reverse Proof Series from the Royal Canadian Mint revives the beloved design of the Peregrine Falcon, Bald Eagle, Red-Tailed Hawk, and Great Horned Owl from the original bullion series. While those coins featured a mintage of one million, the RCM limited the mintage of these coins to just 100,000 per design, which means they’ll sell out quickly!

Emily Damstra’s original designs from the Birds of Prey Series are featured on the reverse, with the Peregrine Falcon depicted swooping down on its prey in this release. The obverse features the right-profile portrait of Queen Elizabeth II as designed in 2003 by Susanna Blunt.

Each of the 2016 1 oz Silver Canadian Peregrine Falcon Reverse Proof Coins in this product listing has a perfect PF70 grade from the NGC. Coins in this condition exhibit full, original luster from the mint and lack all detracting flaws.

The Royal Canadian Mint was founded in 1908 and is the official sovereign mint of the Canadian government. Once limited to just one facility in Ottawa, the federal capital, today the RCM has a second, modern facility in Winnipeg as well that adds to its production capacity.

If you have questions, please direct those to a Silver.com associate at 888-989-7223. You can also chat with us live online or email us. If you are looking for similar products, check out our full selection of Royal Canadian Mint Silver Coins.