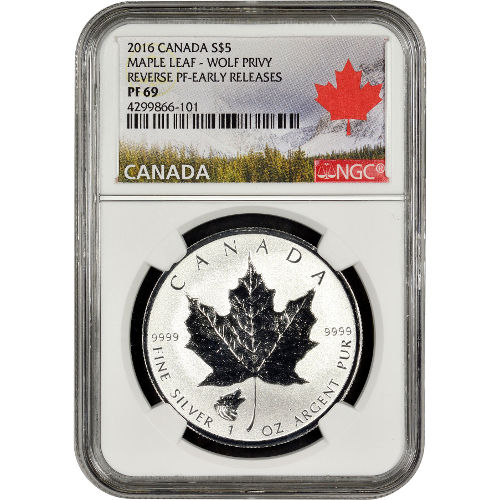 Canadian Wildlife Series coins were introduced two at a time between 2010 and 2013 by the RCM. The first coin in that series was the Silver Canadian Wolf coin, featuring the image of a timberwolf. The Wild Canada Series of Silver Canadian Maple Leafs launches in 2016 with a wolf privy mark.

Each 2016 1 oz Wolf Privy Silver Canadian Maple Leaf available on Silver.com earned a Proof 69 grade from the NGC. Coins with this grade have their full, original luster and no more than two minor detracting flaws.

As a reverse proof coins, these products are struck in opposite fashion from standard proofs. Rather than a matte finish on the design set and a deeply-mirrored background, these coins have a strong, frosted background with a deeply-mirrored, clear design field in the foreground.

On the reverse of each coin is the traditional sugar maple leaf design featured on all Silver Canadian Maple Leafs, with a small wolf privy mark in the lower-left. The wolf privy features just the head of a wolf as it howls at the moon. As part of the Early Release series, these coins were shipped to an NGC depository within 30 days of the coin’s release.

The obverse bears the image of Queen Elizabeth II in right-profile relief. The Royal Canadian Mint’s bullion coins continue in 2016 with the design from Susanna Blunt, created in 2003 for use on all Canadian coinage.

If you have any questions, Silver.com associates are here to help. You can reach us on the phone at 888-989-7223, online using our live web chat feature, and via email.