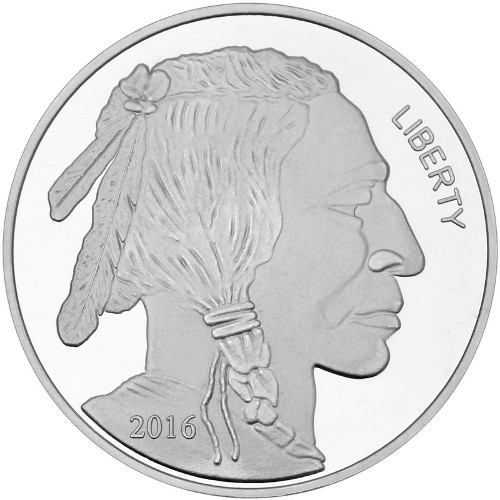 Any quantity available for $1.89 per oz over spot!

The Buffalo Nickel is one of the most iconic circulation coins from American history. First introduced in 1913, it quickly became a popular design in the modernization program from the United States Mint. Today, it lives on as the inspiration for countless commemorative bullion programs and silver rounds from private mints. Today, the 2016 5 oz SilverTowne Silver Buffalo Round is available at Silver.com.

In the early 20th century the federal government and US Mint sought to overhaul the 19th century designs on all American coins. James Earle Fraser was one of several American artists chosen to help the government in its pursuit of modern designs.

Fraser, a native of Winona, Minnesota, grew up on the prairies of the American Midwest. His design for the nation’s five-cent piece included a depiction of a buffalo, inspired by Black Diamond. The bison was a resident of New York City’s Central Park Zoo at the time. His right-profile image of a Native American chieftain was inspired by a combination of facial features from chieftains alive at the time.

On the obverse of the 2016 5 oz SilverTowne Silver Buffalo Round is the right-profile portrait of the Native American tribal leader Fraser created in 1913. Just as it appeared on the Buffalo Nickel, the SilverTowne round includes the engraving of the word “Liberty,” along with a year of issue in the same spot as the nickel that reads “2016.”

The reverse of the SilverTowne Silver Buffalo Round features the left-profile image of an American bison. Inspired by Black Diamond, a resident of the Central Park Zoo in New York City during the early 20th century, this bison appears on a small mound of dirt and is surrounded by engravings from the original nickel. These include the nation of issue, weight, purity, and metal content, as well as the phrase “E Pluribus Unum.”

Please direct your questions regarding this product to Silver.com’s customer service department. You can reach our associates at 888-989-7223, connect with us on the web using our live chat feature, or simply send us an email.