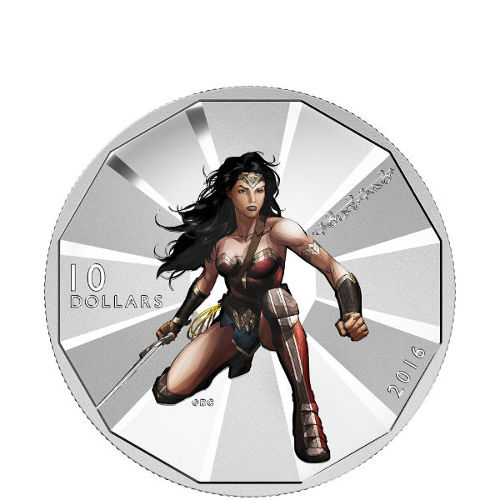 The world is in trouble, and its two greatest superheroes find themselves at odd. The god-like gifts of Superman, which go unchecked by anyone else, pushes Gotham City’s own vigilante to take on the hero of Metropolis. In Batman v. Superman: Dawn of Justice, the world’s superheroes are at odds and a greater threat is emerging. Right now, the 2016 ½ oz $10 Silver Canadian Batman v. Superman: Dawn of Justice Wonder Woman Coin is available for purchase on Silver.com.

With the release of the feature film Batman v. Superman: Dawn of Justice, the Royal Canadian Mint kicked into gear with a celebratory series of commemorative silver coins to satisfy the comic book fan and precious metal investor alike.

The obverse side of the coin feature the right-profile image of Queen Elizabeth II. Created in 2003 by Susanna Blunt, this coin design includes the engravings of “Elizabeth II,” “D. G. Regina,” and “Canada.”

On the reverse of the 2016 ½ oz $10 Silver Canadian Batman v. Superman: Dawn of Justice Wonder Woman coin is a colorized image of the heroine herself. Set in the middle of the coin’s design field, Wonder Woman is crouched with her famous whip at her side and a sword in her hand. The shattered glass design gives great contrast to the coin’s background.

The Royal Canadian Mint is the sovereign mint of Canada, and routinely produces some of the world’s highest purity coins. It operates two facilities, with its original location in Ottawa and a newer location in Winnipeg.

Please direct your questions to a Silver.com associate at 888-989-7223. You can also connect with us online using our live web chat or email address. Go to our Royal Canadian Mint Silver Coins page to view similar products.