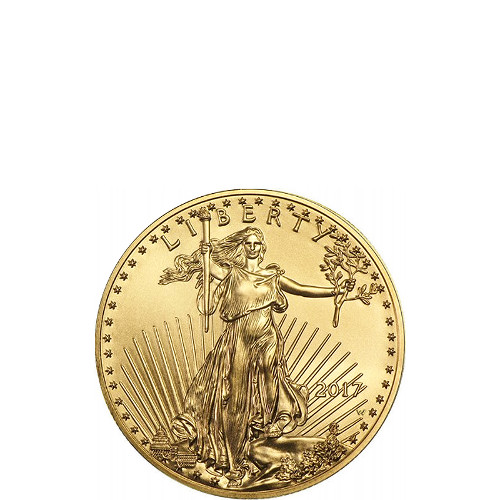 Gold American Eagles are the most popular gold bullion coins from the United States Mint, annually topping the Gold American Buffalo and providing investors around the globe with a proven, safe gold investment option. Part of the larger American Eagle series, these brilliant coins are an annual release from the mint. Right now, the 2017 1/10 oz Gold American Eagle Coin is available to purchase online at Silver.com.

Each 2017 1/10 oz Gold American Eagle Coin listed today on Silver.com is in BU condition. Coins in this condition exhibit no signs of wear and tear, though you may notice minor flaws ranging from breaks in the luster and spotted surfaces to contact marks from the coining process.

Gold American Eagle coins debuted in 1986 along with the Silver American Eagle. As the official bullion coins of the United States, these products feature images familiar to any American and recognized around the globe.

Though the Silver and Gold American Eagles have different specific designs, the obverse of both features images based upon the Statue of Liberty, a symbol of freedom and democracy in the United States. The reverse of both coins includes a depiction of the American bald eagle, the official emblem of the nation.

On the obverse of the 2017 1/10 oz Gold American Eagle Coin is the image of Liberty created by Augustus Saint-Gaudens. Created in 1907, Saint-Gaudens was commissioned directly by President Theodore Roosevelt in 1905 to help begin an overhaul of American coinage that modernized it, while also making it distinctly American.

The reverse of all Gold American Eagle coins includes the image of a family of bald eagles in their nest. Created specifically for the Gold Eagle program by Miley Busiek, this design features a male in flight over the nest, where a female is keeping a watchful eye on the hatchlings within.

All 2017 1/10 oz Gold American Eagle coins are products of the United States Mint. From their introduction in 1986, the Gold American Eagle has been available in bullion in four different sizes from the mint, as well as a 1 oz size in the proof, with fractional weights added in 1987 and 1988.